September: The Party's Over

It would please me to think that the title this month was an ironic nod to the demise of the Conservative Party now that the elders have voted for another Thatcher-lite strong woman to tackle the party's divisions and the nation's short-term needs at the expense of any long-term strategy to address the kind of issues that are no doubt perceived as less urgent, but no. It's a reference to the demise of my ancient father, who finally shuffled off to Buffalo last week at the age of 95, two short of his father's record, and five short of the century that he had set his heart on. He would have loved to receive the royal letter and preside regally over a gin-soaked party to celebrate the centenary of his birth way back in June,1927. It's hard to conceive that someone could have occupied a space on this earth for so long. 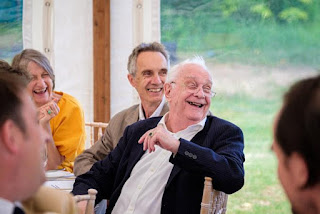 My old dad was a bionic man, held together with NHS interventions and expensive medication. In the end, one of the parts that maintained him gave out and his aneurism ruptured. We all knew that he could go at any minute, nevertheless it came as a shock when it happened. A bit like that favourite old Bosch dishwasher that finally packs up after two decades or more of service. It happened very quickly. The first I knew about it was a call from the older of my two sisters, his daily monitors and guardians, from her husband's car on the way to the hospital. It was in all probability, she told me, the Big One. The point of no return. He had used his emergency hotline that morning and was found by the medics rolling about in agony on the floor of his bedroom. Apparently, they observed him for an hour or so before deciding that he should be taken to the A&E department of Southampton 's main hospital. Protocol dictated that neither sister was allowed to accompany him.

Obviously, it was too late and fairly pointless for me to hop on a plane and try to get there in time. In fact, I'd only recently got back from a week in Romsey, Hants. Fortuitously, the same sister had asked me if I'd consider coming over to stay in her house and look after her two cats, Peggy and Polly, during an extended-family holiday in Falmouth. So I spent a delightful week of cool weather, a respite at last from the ferocious heat here in the Lot, visiting my father every day; doing a bit of shopping here and cooking there for the pater familias (the nabob, as my friend Winston dubbed him); taking him out as and when on a slow shuffle around his territory; watching the test match between England and South Africa together; and even enjoying our team Arsenal's victory over Bournemouth. We even had the rare pleasure of my brother's company for a few days. No one could make the Old Fella laugh like my brother could. Apart from the breathlessness that even a slow shuffle could provoke, all seemed fine and I'd begun to believe that making three figures was more likely than not – given his general good luck in life.

When we said our goodbyes, he and his 'companion' Anne, from one of the flats on the floor above his, were ensconced together for their nightly dose of TV. It was a Coronation Street evening. My father had overdone the gin for his regular 5 o'clock G-Time slot and had topped up his glass with what my other sister couldn't manage to finish, so he was well and truly plastered. He managed to get up, however, and accompanied me along the corridor to his front door for an affectionate farewell hug. Little, of course, did I realise that it was The Long Goodbye. 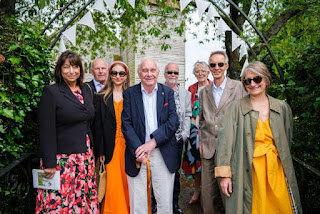 Eventually, my siblings were allowed to be there with him, once he was installed in a side room off the main ward: a last little bit of the good fortune that followed him like a faithful shadow throughout his life. I had spoken of death and dying several times with him in recent times, so I knew that his ideal departure was being at the centre of things in his deathbed at home, surrounded by his loved ones enjoying an impromptu party. One of them might lean over and ask 'Has he gone yet?', whereupon my father would smile and open an eye and tell them 'not yet'. Alas, the bed was a hospital bed and he didn't have a full complement of children, but my brother popped out to get him a gin and tonic from Tesco and my tech-savvy sister Gina managed to find some Frank Sinatra music on the tablet he'd brought with him.

However, and despite the fact that they gradually upped the level of pain relief, he was in much more pain than he or we would have wished. Nor did he ever properly regain consciousness. But right at the end, he asked about all the indistinct human shapes by the window. There was a man in a hat, apparently, who may have been his own father (who sported a bowler throughout his career as a company secretary). And my sister told me, too, that he lifted his hand to greet someone: 'Hello, darling! What are you doing here?' We suppose it was our mother, come to fetch him after his seven-year swansong as the Viceroy of Romsey and lead him off to the Afterlife. I'm not a religious nor even a particularly spiritual man, but such mysterious things are undeniably spooky. Someone with a more scientific bent would probably find an explanation, but I prefer that the mystery should remain inexplicable.

It was just before midnight, three days after what would have been my mother's 94th. He and both my sisters had visited the grave only three or four days previously. My sister Jo left me a WhatsApp message to read the next morning. My wife pointed out that I am now the titular or putative head of the family, which is a salutary thought. I'm not sure what duties the role carries, but I'm determined that it won't change me.

One thing, of course, it will behove me to do is to read a eulogy at the funeral service, which will take place in Romsey Abbey, a suitably august venue for a nabob. They asked if we would like a death knoll to be rung, but we all agreed that it would be far too sombre for what we intend to be a celebration of his life. Afterwards, we are gathering in La Parisienne, just across the road from his official residence. It was his watering hole of choice and the staff loved him and treated him with a mix of deference and jocularity.

The old boy's hearing was shot, but he still loved nothing better than to banter with family and friends. It was his general good humour and perennial charm that made him so popular and I felt very proud to hear how the many friends he made following his move to Romsey, Hants. will miss him. I'll have no one now with whom to analyse Arsenal's efforts on Skype every weekend during the football season. Typically, they lost 3-1 to the old enemy, Manchester United, just days after his departure. At least he'll be spared this indignity.

Posted by Mark Sampson: Man of Straw at 4:29 AM

Mark Sampson: Man of Straw
Born in London, raised in Belfast, further-educated at Exeter and Sussex universities, I'm a semi-retired dilettante, a family man and tireless dog-walker. As a music journalist, I write for 'Songlines' magazine and 'Sounds & Colours'. As an intermittent DJ, I host the eclectic 'Tropical Hot Dog Night' once a month for Decibel FM.