October: Out On Bales

I met a man the other day who's a retired inseminator. His son has been re-surfacing our drive after 20 years of ravages by time and rainstorms. He explained that his father would travel around the territory inseminating cows, but there's little call for it now, given that small-time farmers are increasingly calling it a day and the big farms that remain tend to have their own resident bulls for the deed.

I witnessed an inseminator at work a few brief years ago on a dude ranch on the Plateau de Millevaches while working on an article for the late-lamented France Magazine. Wearing a disposable glove, the man in question pushed his hand up one of the horse's back passages, half way up his arm. It was a most uncommon sight and not one that I would necessarily wish to repeat. The retired inseminator seemed happy to have quit the profession and ready to help his son as and when needed – in this case by fetching and carrying lorry-loads of limestone chippings from the quarry near Martel. 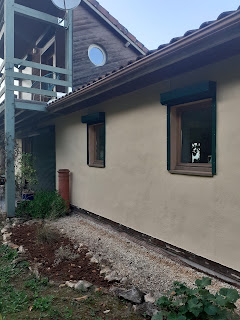 While they were hard at it, I was second-coating the front-of-house with a lime-wash from Lakeland Paints in Cumbria, part of the consignment of five tins that I boldly smuggled through customs in August. It's been ten years or more since the last lime-wash: a proper home-made one with lime, water and colour. Mix well and apply. Getting an even colour, however, is a bit of a lottery and, having turned a daunting age this month, I decided to cheat. What it added in money, it reduced in effort. The Good Wife wasn't too happy with the new colour at first, but a second coat has turned a lemon shade into the hickory colour we decided would look smart. Next time, we'll order a colour sample, although by the next time I'll have one foot in the grave.

So it's been all go this month. I haven't let up for a moment, given that the temperature is ideal for a lime-wash: somewhere between about 5 and 20o, if I remember correctly. I was even out there, up a ladder, on a Sunday morning: the tranquillity of this beautiful autumn shattered by the baying of hounds and periodic gunshots. I've signed several online petitions begging our jumped-up miniature president to ban hunting on a Sunday. Having lost so many votes in the last election, however, Monsieur Macron will be reluctant to upset the hunting fraternity. Every vote will be precious to him, no matter how moronic.

Lime-washing per se isn't so bad, not with an MP3 player and our little Anker sound-bar at least. It's the ordeal by mosquito and climbing rose that turns the air blue. The mosquitoes are a legacy of a ruinously hot dry summer. The minute they see my bare legs, they get the taste for blood. I suppose it's my own fault, wearing shorts, but it's a question of pride: I refuse to let the little bastards drive me into jeans. So it's a power struggle. And if the insects don't get me, the vicious climbing rose at the back of the house almost certainly will. Even so, once the sun gets too hot around midday, you can retreat indoors, show off your battle scars proudly, and glow with a sense of satisfaction at another stage of a job well done. It's been a fortnight already and, by the time I finish, the endurance test will have been longer than the Tour de France. The Big Question is, though: will I have enough paint?

Underneath several coats of lime-wash and an inch or so of lime render, our straw bales seem to be doing pretty well after a couple of decades. Maybe even as pristine as my friend Bret's. I took a morning off the other day to go and help my original co-baler move and stack his bales in readiness for the next stage of his build. 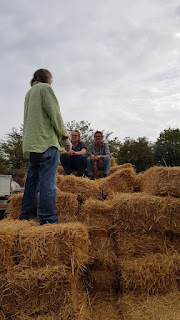 Bretland lies across the valley and every time I venture to the other side, I get hopelessly lost. I haven't got a SatNav in my car and will probably never have one because I prefer to study maps and fix a destination in my head. It doesn't always work. I asked for directions in readiness, but he sent me one of those Google pins, which only confuse me the more. As Howling Wolf once sang, 'I asked for water and she gave me gasoline.'

Sure enough, I was there or thereabouts in good time for the rendezvous at ten. I then proceeded to get hopelessly, tearfully lost. I toured the immediate area, driving up hill and down dale; turning round and trying another unmarked side road, and finally bumped into Bret and a trailer full of straw bales around 30 minutes later. I helped to unload them while Bret directed the stacking operation. Handling the raw material of our house brought it all back. For years they have been out of sight and out of mind, but here they were again: the giant Weetabix biscuits held together with two parallel lengths of twine. Bret's have been in storage since pre-Covid days, but they were every bit as dry and as crisp as ours were after the canicule of 2003.

It took around two hours to get them solidly stacked and then covered with what appeared like an enormous plastic tablecloth. I should mention that working with a chain gang of usual suspects under Bret's watchful eye was a rather more efficient and well organised operation than the current British government. I generally keep my head out of the news for the sake of sanity (although hearing that James Corden was called a 'tiny cretin of a man' is a positive tonic), but one can't escape the daily headlines about U-turns and endemic incompetence. It's hard to believe that the Conservative party can survive such a monumental cock-up. One has to hope.

In the meantime, I was dismayed to find an e-mail or two from the Conservatives among the hundreds and thousands requiring my attention. But how on earth did they find their way into my in-box? I can only think that it was some misdirected attempt to contact the new clueless prime minister and urge her to do something to benefit the majority rather than the over-privileged few.  Wasn't life so much easier in the days before e-mail, by the way? Once I stop lime-washing, I can return to the really pressing matters of state, such as deleting unwanted messages.

While striding around on top of Bret's bales, helping to pull the giant tablecloth over them to keep out any rain that winter might bring, I made some flippant observation about being born to bale. When the time comes to account for my achievements over the course of a lifetime, the only solid thing I can claim – apart from my contribution to a baby girl – is this one family house of straw. It requires a certain amount of upkeep and maintenance, but don't they all? Lime-washing is fairly long and arduous task for a sexagenarian, but on the whole I reckon that protecting your bales beats thrusting your hand up a cow's fundament.

Posted by Mark Sampson: Man of Straw at 5:23 AM

Mark Sampson: Man of Straw
Born in London, raised in Belfast, further-educated at Exeter and Sussex universities, I'm a semi-retired dilettante, a family man and tireless dog-walker. As a music journalist, I write for 'Songlines' magazine and 'Sounds & Colours'. As an intermittent DJ, I host the eclectic 'Tropical Hot Dog Night' once a month for Decibel FM.