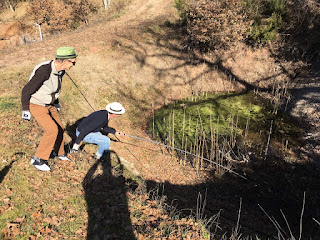 The man with the Panama hat and the telescopic rod is my friend and fellow golfer, Steve. That's me, looking on anxiously – a permanent state of mind – while he fishes for the ball that I sliced into one of the ponds that dot the first hole at our local course. Steve extended his egregious rod and fished out my ball. I hung onto it for all nine holes of that particular round, but still managed to play disastrously. It's a depressing thing when you realise that you're not progressing, you're regressing. The first time I played, back in early January, I played so well because I was loose and relaxed and had no expectations. That set up expectations, which bring the mind into play. On every subsequent occasion, I've played like a cretin. I can't even remember to keep my eye on the ball. Next time, I shall try repeating the words of the wonderful W.C. Fields in a priceless scene from You're Telling Me: 'Stand back and keep your eye on this ball'.

On the subject of fishing, the month of February was notable for the death of a fishmonger. We've been nominally vegetarian now for getting on 30 years, but have succumbed for about the last ten to a periodic temptation from the deep blue sea. It's not really regular enough to warrant the term 'pescatarian' – although card-carrying members of the Vegan Party would insist that we were just that (and probably be technically correct) – but The Good Wife does, or did, from time to time bring home something fishy from Brive of a Friday evening. Whenever we considered that we needed a good shot of protein.

She hasn't done so since Christmas. Every time she has gone past the fishmonger's stall, in the little pedestrian-only street that runs down from the inner ring road to the big church at the town's core, it has been closed. She figured that he and his wife must have gone to the Caribbean for a bit of R&R in the sun after his busy Christmas period. Then the absence grew increasingly longer until the other day, when she noticed some flowers laid to rest. On making her enquiries, she discovered that he was dead. The fishmonger had a massive heart attack on the eve of his second-busiest day of the year: New Year's Eve. So anyone who had ordered fish for the réveillon dinner would have been bitterly disappointed.

In the summer months, he would put out a few tables and chairs and serve mussels and chips and other delicacies – whatever was fresh – to the town's professionals and shop keepers during the two-hour lunch break. He did a roaring trade, so his clientele will be lost without him and the small body of staff he employed will find themselves without a patron and a livelihood.

His fish was the best. He sold only what was in season, so there wasn't much choice, but you always knew that what you were getting would be good and responsibly caught. We used to eat our occasional fish with a reasonably clear conscience. The fishmonger had an eye (a bit of a wall-eye at that) for the ladies. He was particularly gracious towards my wife and would make sure that she had the prime cuts and plenty of them. His wife runs a camp site and he asked my wife once if she wouldn't mind translating his wife's brochure. My wife, being a generous and spontaneous soul, said of course she wouldn't mind doing it – though she found the request a little unorthodox. For all her propensity to exaggerate, she tends to underestimate effort and expense, so she found that it took much longer than anticipated. Instead of paying her for the service, her fishy beau gave her a little of what she fancied. And what she fancied were coquilles St. Jacques.

Now, the flirting's over. Perhaps our occasional fish is off the menu, too. We're not sure what will happen to the shop. Maybe there'll be the equivalent of a management buy-out, but I somehow doubt it. For one thing, once the Administration becomes involved, everything slows down to the speed of an event that I remember from my primary school in Belfast: the slow bicycle race. Participants would try to be last across the finishing line without wobbling out of their lane. I never took part myself, because I was ashamed of my bike and because I'm an inveterate non-joiner. But occasionally I find myself trying it these days while waiting for Daphne to catch me up if she's been distracted by something in a field (like horse-do felafels). It's not easy.

February's going fast and will probably prove the hottest February since records began. The bulbs are shooting and the fruit trees budding – all in readiness for the inevitable hard frost that will come riding in at some unseasonable moment like a meteorological horseman of the Apocalypse. Meanwhile, there's fishing all over the world. In the Disunited Kingdom, the soft Brexiteers are fishing around for a last-minute deal, while the hard Brexiteers are being obdurate, obstreperous and obstinate. Both the main political parties are busy rending themselves asunder in step with the rest of the nation. In America, the Democrats are fishing around for ways to get rid of the flaxen-haired dictator or at least to limit the damage he is wreaking. In Europe, the EU is fishing for ideas in the face of rampant nationalism and impending break-up.

Here in these parts, the traditional hard-nosed men of the community are preparing to put away their guns and bring out their rods. I went fishing once in my life, at the insistence of a persistent Parisian who used to holiday in our old village. Fortunately, I didn't catch anything, but I've never been so bored in my life. Gone fishing, I quipped on my departure. Done fishing, I quipped on my return. My aim for the month ahead is to improve my golf game. Keep my balls on the fairway and out of the ponds, for a start.
Posted by Mark Sampson: Man of Straw at 1:43 AM No comments: