A riveting documentary on Ingmar Bergman the other evening taught us that his name is pronounced Beer-man by his fellow Swedes. It was shown as part of a double bill with The Seventh Seal, which I haven't seen for decades. Perhaps not since the Exeter University film club, where I'd go to late-night noisy projections of classics with my friend Jacqui, who'd promptly fall asleep soon after the lights were dimmed. I'm looking forward to seeing the film again; this time on a sofa with The Good Wife (a potential film title there that Beer-man overlooked), who'll probably fall asleep after 20 minutes or so. After 25 minutes, I'll probably give up nudging her and carry on regardless. 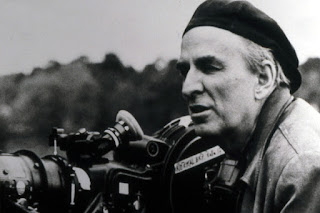 In fact, we both drifted off momentarily during the documentary, but then Beer-man does that to you. His generally dark, despairing and strangely hypnotic films are not necessarily enjoyable, but always compelling. Rather like the man himself, it would seem, whose films are essentially about himself. Learning this made me feel a little better about writing essentially about my own life. Stick to what you know, they say – and living as I do in splendid isolation, who or what else do I really, really know?

Not that I would compare myself in any shape or form to Beer-man – thank the Norse gods. The man was driven and utterly ruthless. He neglected his wives and his children in pursuit of his art. He suffered constantly with stomach ulcers and such like and was never what you would describe as happy or content. And yet one of his wives, the actress Liv Ullman, still spoke of him through her tears with the utmost fondness. The paradox, I suppose, of great artists: you can't live with 'em, but you can't live without 'em.

The gloomy one's output was certainly prodigious. In 1957 alone, we learnt, he made two unalloyed masterpieces, The Seventh Seal and Wild Strawberries, and produced four stage plays. How is that humanly possible? No wonder he had ulcers. He – and some of those around him, it seems – paid quite a price for his immortality.

I'm rather glad that my father, John Barry Sampson, bears no resemblance to Beer-man. He might behave at times with old-age hauteur, but at least he remembers the names of his progeny. Remarkably compos mentis for one so ancient, he can still dredge up details of films and big-band jazz. His longevity is totally unexpected. Given his long-term heart condition, the only reason he got to be 92 is surely his almost Dickensian indolence. He is the very model of the world's laziest man. Dickens would have depicted him sitting in an armchair by a fire, sporting a smoking jacket and one of those brimless hats worn by the likes of Sean O'Casey. The Ageing P incarnate, receiving a succession of solicitous offspring. 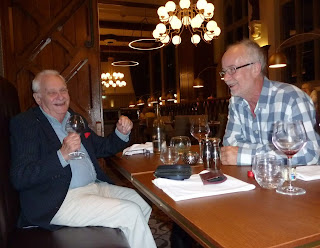 He once met the Duke of Edinburgh at a trade show (strangely enough in Sweden, if I remember correctly), but otherwise has never achieved anything of note – nor ever particularly wanted to. He is happy to sit in an armchair garlanded by the Arsenal scarf I bought him, listening to music through the Bose sound bar his solicitous offspring bought him for his 90th birthday. And he is quite happy for other people to do for him what he can't be bothered to do for himself. Such solipsistic laziness can be highly exasperating. Geniality, however, 't'is generally his middle name. When he finally decides to hang up his walking stick for good, he will be remembered affectionately by friends and family alike.

Recently he has adopted the strap line of an old music hall hero of his, Billy Bennett: Almost a gentleman. A few weeks ago, my brother and I took our wannabee gentleman patriarch to the beautiful town of Great Malvern for a visit to see his old school. Although we had to endure the overgrown child's occasional tantrum – when for example he decided that he didn't like the curry he ordered in an Indian restaurant because it had coconut in it and he doesn't like coconut even though the menu, which he probably couldn't be bothered to read properly, stated clearly that a key component of the curry was coconut – most of the time his enthusiasm and evident joy was delightful.

Under the terms of the agreement, we hired a car comfortable enough to transport his aching bones for 100 miles or however far it was, while he footed the bill for the posh hotel. The focus – and the highlight – of the visit was the guided tour of his old school on a gloomy Sunday afternoon. The Pater and I had set up the visit by e-mail (his draft, my spelling corrections) and we waited in the lee of the main Gothic building for the arrival of our guide, who had driven up from an Old Boys' football match somewhere in Surrey to keep his appointment. We had all pictured a stiff, slender and very sober individual, but were delighted to find a jolly, rotund man with a sense of humour that stimulated the kind of banter on which we Sampson males thrive. 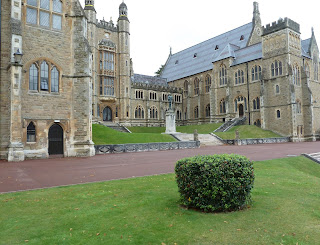 With a backdrop of the Malvern Hills, whose beauty inspired Elgar (for one), the buildings and the landscaped playing fields occupy around 250 acres. Malvern was and is a well-heeled spa town, and wealthy businessmen sponsored the building of the school in the 19th century. In my dad's time, it was a boys-only boarding school; these days they've had the good sense to admit girls and day pupils, whose well-heeled parents can find the requisite 40 grand or so in annual fees. The cricket pitch would grace the County Championship and the general facilities are second to none. This kind of education should be available for all, I observed. Yes, but the money that would entail, our host replied. Well, we seem to find it for missiles, I countered. And so education continues to be the poor relation to warfare.

My father was actually at Malvern for just over a year. My grandparents sent him there at great personal expense so he would be far from London's theatre of war. But the school was requisitioned by Telecommunications and Radar and my dad was forced to slum it at Harrow – right back in the thick of things. While at Malvern, he boarded in no.4 House. It's now occupied by girls, whose house mistress is an attractive jolly-hockey-sticks type only too pleased to show my still flirtatious father around. How strange it must have been for him to see the place after almost 80 years: decidedly more comfortable and relaxed than it was in his Spartan days. Their common room was equipped then with a table and chairs; now there are carpets, sofas, cushions and a television. There is, a school video suggests, a clear link between the happy pupil and a pupil who's achieving. 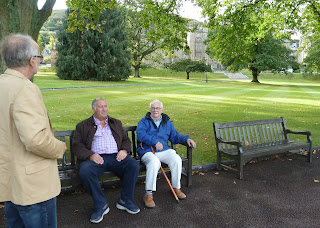 By this stage, the old man was getting breathless from his unaccustomed exertions. We sat him down on a bench under a tree with a view over the cricket pitch, where once he had kept wicket with little talent and moderate enthusiasm. Behind him was the heraldic statue at the foot of the stone steps leading up to the main Gothic building. In my dad's day, only prefects had the right to take this route. In his day, too, only an amateur 'gentleman' player had the right to captain the England cricket team. Our 'great British nation' was founded on such arrant absurdities.

Next day, we took our charge back home to Romsey the quick way via a coffee stop near Marlborough at a roadside cafe that welcomes bikers, truckers and, it seems, Old Malvernians. Tired out by his exertions, he took himself off to bed for the afternoon. The Brother headed back to Guildford with the hire car, while I did a final trawl of Romsey's charity shops.

Our weekend away underlined just what a fortunate and privileged life our father has led. At least he has the good grace to acknowledge that he has been dealt a much better hand of cards than most. He's a lucky man, but I consider myself lucky to be able still to exchange on Skype views and news about the Arsenal. Even if he was never able to give me a leg-up into the wonderful world of film, he taught me to be polite and punctual, and to love music and animals. I'm eternally grateful for that.
Posted by Mark Sampson: Man of Straw at 6:12 AM No comments:

Mark Sampson: Man of Straw
Born in London, raised in Belfast, further-educated at Exeter and Sussex universities, I'm a professional dilettante, a family man and tireless dog-walker. As a music journalist and intermittent DJ, I'm waiting for the local radio station to be declared a virus-free zone before renewing my glittering career as Prezident Markon.