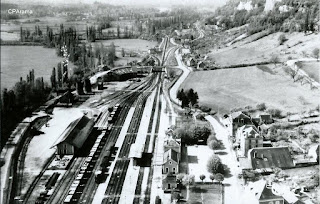 Only the other day, I was driving along the bottom road in the direction of Brive. The SNCF vans were out in force for the work on the level crossings along this single-track stretch of railway between St. Denis lès Martel and Quatre Routes du Lot. Some hugely expensive and ultimately doomed operation, no doubt. Between the raised railway line and my car, I spied the little bent man I see from time to time, walking determinedly with the rolling gait that comes with his deformity, and with a furled umbrella tucked under his arm. He walks at quite a lick for someone with such a natural disadvantage. But where he walks to and where he walks from, I don't know.

Sometimes I've seen him wearing a 'hi-vis' waistcoat, but not recently. Maybe he has shed it since the gilets jaunes have brought the accessory into disrepute. I wonder about his life. I get the feeling that he goes out on a long circular walk every day, come what may and whatever the weather. He's either invalided out of or retired from full-time employment. What else does he do in life, this man on the road to nowhere? Is he visiting a paramour? Does he have a wife at home, waiting to greet him on his return?

I'm home, dear! J
Ah, just in time for lunch. Did you enjoy your circular walk?
Not bad, not bad. I stopped off at the gypsy camp for a chin-wag. What's for lunch?
Belly pork and frites with a little salad composé fresh from our garden.
Sounds delicious. Merci, ma chère.

This is a dangerous time of life. Next birthday, I will be 65 – which will make me unofficially a pensioner, now that the official age has been raised to 66 plus. Just as 21 has remained the landmark even after the legal coming-of-age was downgraded to 18 a few decades back, for me and my generation it will ever be 65. I remember when both of my grandfathers retired. One minute they travelled to the City to work each day, and the next minute they were at home full-time. Pottering in the garden, solving crosswords, serving drinks, going to Sainsbury's and such like. I probably asked at the time What's retired? and was probably told that it meant that you didn't have to go out to work anymore. So I might have deduced from this that between the ages of 21 and 65 a man worked and after that he got to do nothing of any import.

When I passed 60, friends from the old home gave me a plastic cover for my Sheffield bus pass when the time came. Later this year, I can apply for something to go inside it. Not that there'll be anything for free in this country, though. The French are notoriously 'thrifty', for all the recent promises of our young president in his latest fruitless attempt to boost his ratings. 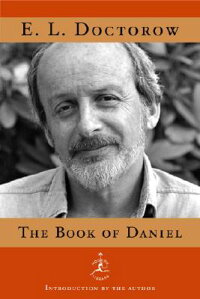 Freebies aside, I am more immediately concerned by the dilemma of when legitimately one can stop focusing on the future and derive succour from the past. This was triggered specifically by a novel. After many hints and much persuasion, I persuaded The Good Wife to read The Book of Daniel by E.L. Doctorow: a brilliant novel based on the public execution of the Rosenbergs during the anti-Communist US witch hunts of the 1950s. She loved it. So I've been thinking, Can I now at this time of my life ignore what's still to be read to re-visit a novel that I last read over 40 years ago? A novel that actually prompted me to speak up for once during an academic seminar. A novel that has been on my list – which includes things like John Kennedy Toole's madcap A Confederacy of Dunces – of books that I want to read at least once more before it's time to go.

Although neither requires such an investment of time remaining, it's a similar thing with music and film. For years I've hoarded re-viewings of things like The Wild Bunch for that mythical day when I finally knuckle down to some serious creative work tempered by leisure devoted to the best of the past. Musically, I am still driven by the search for the lost chord: that quest to find something new that will blow my socks off, rather than admitting that I have all that I can possibly listen to and simply re-cycling what has already blown my socks off first time around. My brother is given to ask me, How long would it actually take you to listen to every piece of music on your shelves? He knows it irks me. You might as well tell a junkie to stop because the memory of the first fix ought to suffice. But he's right. Probably about 10 or more years. Non-stop.

So shall I finally give in to temptation and read that Doctorow novel again? Après ça, perhaps, le déluge. Will it represent a line drawn in the sand, and if so does it suggest that one's time is effectively up? The challenge of old age, it seems to me, is to ward off ossification by continuing to learn and to embrace new experiences. Without that, the Brexit mentality is all that's left. Staying active rather than passive is surely the thing. 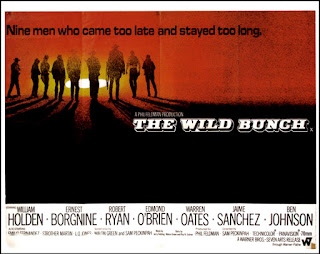 Hell. Do you know what? I'm going to re-read The Book of Daniel and be damned. If I follow it with A Confederacy of Dunces or a repeat viewing of The Wild Bunch (the director's cut arguably doesn't count), I'll know I'm in trouble. But maybe it won't come to that. Perhaps I'll be able simply to read it, discuss it and then get on with something new until the next time I'm overpowered by a need for re-discovery. Ah! Maybe the crux of the matter lies in that very word: re-discovery; an active not a passive impulse. So perhaps I'll be OK after all. Just so long as I don't start taking myself off every day on a circular head-down walk with no particular place to go.

I'm home, sweetheart!
Oh good. Just in time for lunch.
Mmm. What are we having today?
A velouté of lightly simmered weeds from the garden.
Posted by Mark Sampson: Man of Straw at 10:14 AM No comments: