Not long before the heat wave, on a chilly wet evening in Collonges-la-Rouge, I gathered with my fellow rootless compatriots for a concert in a restaurant on the main road. All summer long, it lures unsuspecting tourists to sit at one of its tables. In our case, it wasn't the food but the Honky Tonk Men that tempted us to step inside: American Steve on bass, Anglo-Iraqi Steve on guitar and vocals, French Guillaume on drums and Fred the Gaul, a septuagenarian lead guitarist who can fire off an educated solo at the blink of an eye. 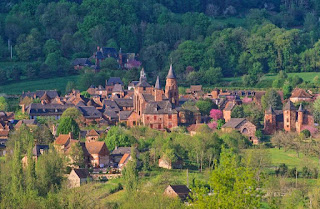 The food was abominable. Enough to make me ashamed of my double nationality. I had a pizza with a base that resembled one of my mother's sickly pie crusts, may she stay forever out of the kitchen in the Afterlife. The Good Wife and our friend Sophie had omelettes filled with potatoes disguised as the advertised girolles. Evelyne and her husband Michel ordered a great big plate of chips that were caked with grease and uncooked in the middle. We're not talking Bootle here on a Friday night, but France: a country that still believes its cuisine is second to none.

As the band wound down and the evening hastened towards Bedfordshire, I sat with my friend Dan and heard about his new turntable. We made a date to spin some records together. I told him about my golf war, because I know that Dan has half a mind to take up the game. He's a natural, by all reports. I promised to take him for a round with one of my guest tickets some day. But can I do it to such a lovely chap? I'm beginning to discover what a vicious and spiteful game this is. Dan's still at the innocent, dewy-eyed stage of hitting the ball without worry or pressure; playing his natural game. I lost my innocence back in January, when I signed up for a year's membership based on one exceptional round of nine holes when the shoulders were loose, the mind was uncluttered and my eyes were fixed very much on the ball.

Ever since, I've been trying to get back to the Zone: a mythical place that the gorgeous Simona Halep inhabited for the hour it took to demolish Serena Williams in the women's final at Wimbledon. It all came so easily to her; it was breath-taking to witness. I'm clearly trying too hard. Not long after the concert and just a day or so into the heat wave, I went round the topographically-challenging course with John from Wisconsin and the two Richards, I and II. I played so excruciatingly badly that I've felt ever since like taking myself off to the golfing equivalent of a leper colony, there to live on nuts and berries and to hide from the gaze of my fellow man. Golf, I understand now, is a recipe for self-loathing every bit as virulent as Frederick Exley's, whose self-excoriating A Fan's Notes I've recently finished. Exley's frustrated literary ambitions and loathing of his fellow man turned him into an alcoholic, but eventually combusted in a book every bit as funny as Cuckoo's Nest and A Confederacy of Dunces. He and those close to him paid a heavy price, though, for his little piece of immortality. I try not to be a burden to mes proches.

My own subsequent fear and loathing was intensified by a fortnight of the kind of temperatures normally reserved for the Arabian peninsula. No wonder their collective demeanour sometimes mimics that of a French civil servant. When the thermometer goes way up over a hundred degrees, there ain't nothin' you can do. There are only so many clothes you can remove, so many shutters you can shut, so many glasses of water you can drink. A fan merely blows hot air at you. Flowers wilt and animals collapse. I felt grumpy and hope-less; my thoughts were constantly preoccupied with intimations of catastrophic droughts and raging wild fires. From 9am till 9pm, you're fit for nothing. And it's only going to get worse from now on in. Worse still if Boris Johnson, Baby Trump, wins the battle to lead Britain's unruly ruling party.

The recognition of things to come had us both gathered at a summit meeting across the table, earnestly discussing climate change and our options for the old and helpless stage of our old age. Should we sell up and go? If so, where? Back to England, where the summer sky is still usually cloaked in clouds? Or Norn Iron, perhaps, where it won't start seriously heating up for at least another century? Or should we rent a place by the sea and open our house up to summer lets? In the end, as per most summit meetings, we failed to reach a decision. So it goes and so we will burn and expire.

My mood wasn't helped by the return of the Youth of Today. The young son of the Parisians who camp every August in the old house at the foot of the dog's meadow turned up with a mate in the parental car. Cue partying and thumping rap all through the night. I bumped into the Yoot when I was out walking Daphne in the cool of an evening. The son stopped the car for a personable chat and told me that, if the noise got too much, I should mention it to him. And so I did after the third all-nighter. I sleep through anything, but the Good Wife was sleep-deprived and due at the massage couch early the next morning. After a day composing my diatribe, I finally wandered down the chemin rural to confront the YoT. I could have said something clever and cutting – if there's anything worse than rap, it's French rap – but decided to keep it simple, stupid. (That's KISS to training officers and other purveyors of acronyms.) I told the son and his mate that it was a bit much, explained that we had to sleep with the door open because of the heat and that we could hear every sound because it rises up from their sleepless hollow – and they apologised. I thanked them for their understanding and left it at that.

Since when, they've been as good as... if not gold, then let's say copper. No complaints. Which is not what I can say a propos the insect population. There's a virulent new breed of tick about, so tiny that it resists the grip of the plastic hook. Debs got one buried in the soft flesh of her thigh, impervious to the hook, the tweezers, the essential oils, the green clay, the needle – everything but a visit, finally, to the doctor. I picked one up the other day that sunk its mandibles into my belly. I must have caught it napping, because it came out easily with the tweezers and I flushed it down the basin into the murky depths of the fosse septique, where all manner of horrible creatures decompose with the household excrement.

And there are the flying mange-touts, as we call them, that get into the house to lurk in shady corners, only to leap out at you and give you apoplexy. They look just like the locusts that used to live in a tank in the biology block of my old school. Fortunately, they seem to come in singles or pairs, but not in swarms. Not yet, anyway. I had one on my desk the other morning and we stared at each other for a good minute or two while I decided how to tackle it. I was sure that I could see him sizing me up through his bulbous eyes. In the end, I went for the plastic goblet with a card underneath. Off it flew to feast on our wilting vegetation.

Now, ironically after the extreme heat has dwindled, it's the flies that have been sent to plague me. They congregate in the kitchen and no matter how many I kill, the multitude is back within 10 minutes. I'm good with the fly swat; I have the reactions of a sportsman. My wife objects, but I sweep up the kill and I tell her that it's for her own good. If I didn't do it, could she possibly imagine hell that would be our kitchen? What a vile little creature the fly is. It flies around in search of something clean on which to secrete its bodily fluids, only to meet sudden violent death in the shape of a swot with a fly-swat. To paraphrase the great Curtis Mayfield's 'Billy Jack', Can't be much fun to be whacked, whacked with a fly-swat. Wouldn't it be nice to think that odious humans like Trump and BoJo might be reincarnated as common houseflies?

Ah, what sport to swat the despicable! And what sport we've had to keep up morale. That epic final between the ageless Federer and the relentless Djokovic, who will surely overhaul the Sublime One's total of Grand Slams – but only by dint of persistence. And the cricket World Cup, whose final was probably the greatest game ever staged. The sheer excitement and tension and ultimate elation left me gasping on the sofa. I'm inclined, however, to start a petition that the trophy should be shared with New Zealand. What a great gesture that would be in the current climate. 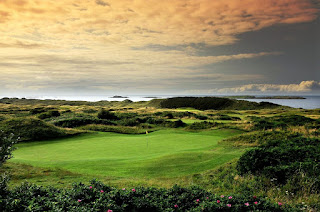 And there's the British Open golf tournament still to come, now restored to Royal Portrush after nearly 70 years (of hurt?). I'm rooting for the Boy McIlroy of course, but not too hopeful that it won't be once more another accursed American. Me, I've been back to the scene of my degradation a couple of times already. It has been a little better, but only a little. I need a new golf swing (and a new fly swat, for that matter). Actually, a new upswing to my mentality would help the most. We've been watching George Clooney's attempt to do justice to Joseph Heller's Catch 22. I'm reminded of the doomed McWatt's words to Yossarian: something along the lines of With me, it's happy happy happy, dead. With you, it's worry worry worry, dead. McWatt was dead right.
Posted by Mark Sampson: Man of Straw at 8:10 AM No comments: