The Woodpiles Of Savoy

You may know by now that I have this thing about woodpiles. The more geometric they are, the greater my fascination. It’s as if the meticulous nature of the construction provides a glimpse into the private life of the constructor. It has to be a man – and a fairly anally-retentive one at that.
Some of the finest woodpiles I have thus far located in France are to be found in Savoie. I’ve been spotting woodpiles in the erstwhile Duchy for well over a decade – ever since our stays with friends from London in Philip’s in a little village called La Chapelle Blanche. There was indeed a lovely white chapel in the village and, right opposite Philip’s maternal grandmother’s house, an extraordinary mural of Snow White and The Seven Dwarves. This masterpiece of kitsch was the work of the householder, an Italian by origin. Over time, it had become a local landmark. Philip and I once shared a flat above an Italian deli in Brighton when we were students together and the Snow White mural always got us reminiscing about the fixtures and fittings of our former lodging. The kinetic orange wallpaper of my bedroom once drove away a visiting friend, because he was susceptible to migraines. We paid our monthly rent to the Godmother, as we called her: a tiny bespectacled woman who seemed to totter under the weight of her bleached blonde beehive, which pre-dated Marge Simpson’s barnet by several years.

It’s apt that such magnificent woodpiles are to be found in such a spectacular region of France. The grandmother’s house, for instance, was perched on a steep grassy slope dotted about with fecund apricot trees high above a tributary of the river Rhone. At night, served by Philip’s maiden aunt who would come down from Paris with the keys to the linen cupboard and wait resentfully upon all who stayed in the house that she co-owned with her sister, we would eat dinner on the terrace and watch the sun set over the Massif de Chambery. You could climb up to the top of the mountain-ette on which the village sat for a view across the snow-capped peaks to Mont Blanc itself. It was Himalaya City.
Whether it was his aunt who ground them down with her martyrdom to the cause of other people’s enjoyment, I don’t know, but Philip and his family gradually stopped going to La Chapelle Blanche. Or maybe they simply continued to go there unannounced, because the Sampson family failed to pull its collective weight. The result was that the region we’d fallen in love with went unvisited until last summer, when other old friends invited us to their summer retreat. 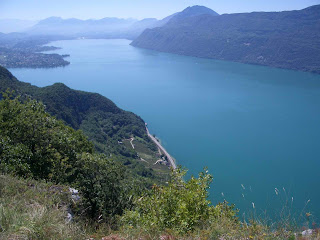 Claude’s grandmother bequeathed him the wine grower’s store, or cellier, where she spent much of the war hiding out from the Germans with little more than a sink and a wood stove to keep her going. Over roughly two decades, Claude and Jacqui have been rendering it little by little rather more habitable for privileged citoyens of the 21st century. The cottage nestles at the foot of a dauntingly steep drive, hidden away by the undergrowth from tourists and occupying armies. It overlooks the Rhone valley just north of the Lac de Bourget, the biggest natural lake in France. From the nearby village, you look across to a ring of mountains on the horizon, which suggested to Balzac the chipped rim of a bowl containing the cool, clear water of the lake. It’s a view worthy of the woodpile just by the typical walled cemetery. I envy its owner in the same way as I envy my brother-in-law’s desk. Even the Welsh version of the humble adjective ‘tidy’ wouldn’t do it justice. If I had a stock of wood like that – with enough logs for at least six harsh winters, all cut uniformly, graded clearly according to drying-time and stacked under solid cover with the perfection of a mathematical equation – I think I could stop worrying about hyperinflation and all those other predicted disasters to come.
Maybe I shouldn’t reveal this, but… at the opposite end of the lake to the ever-popular spa town of Aix-les-Bains, you can bathe in the most awe-inspiring swimming pond imaginable, largely untroubled by the kind of maddening crowds you find in most other tourist hotspots at this time of year. No wonder that we jumped at the opportunity to go there for the second August in succession and renew our love affair with an area that didn’t become properly French until after its ‘incorporation’ following the Treaty of Turin in 1860 (and a plebiscite that was reputedly as skewed as a Zimbabwean presidential election).
There’s only one problem about Savoie – it’s seven hours there and seven hours back. That’s a long time for three humans and a dog and all their clobber (packed with the economy of Savoyard firewood) in my wife’s 107. It’s a modern miniature car, so it’s got a better economy rate and a better stereo than the Berlingo, and – although rarely used – it comes with climatisation (not for us, you understand, but for the comfort of a panting dog). To the eternal credit of the group that adopted such a socially responsible name, we all surely know by now that Dogs Die In Hot Cars.
And so it came to pass that, blissfully far from the world of e-mails and wi-fi, I failed to despatch my customary missive. We spent five days with friends in near perfect harmony, pursuing the kind of Edwardian aristocratic rhythms depicted in The Go Between. a leisurely breakfast followed by a leisurely swim in the limpid water of the lake, followed by a protracted lunch, a drowsy read and a blissful, leisurely siesta before a protracted dinner. So utterly carefree did my good wife and I feel that, one morning, while everyone else was still asleep, we took the dog out for a walk around the local vines… in pyjama bottoms. The humans, that is, not the dog. And did we give a fig – even when passed by the very occasional car? Even when the thought crossed our minds that they might wonder whether we wore pyjama bottoms in bed? We did not.
After dinner, while the women folk sipped port and smoked cigars underneath the wisteria, Claude and I were even able to watch the final evenings of Olympic derring-do from London on the telly that he brought with him from home. I can tell you now that the French coverage was no less partisan than the BBC’s.
Five days is a perfect length of time for a holiday with even the very best of friends. You can leave before any nagging and niggling dampens relations, secure in the knowledge that you won’t have blotted your copybook. It was a long, hot journey back from the Duchy of Savoy in a tiny tightly packed car. Apart from the dismal stretch between Lyon and St. Etienne, you speed past stunning scenery on under-employed motorways. Maybe I wasn’t looking properly, or maybe I had been spoiled by what I’d seen in Savoie, but – strange to relate – I didn’t spot a single woodpile.
Not until the old familiar rather haphazard pile that lines our track. It’s still always good to get home.
Posted by Mark Sampson: Man of Straw at 5:54 AM