Every Sunday morning at around 11 o’clock, ever since we first dropped anchor in France, I speak to my parents back home. With the coming of Skype and the possibility of vision, things have become more ‘virtual’ over the years. During the first ten years or so, my father would ration our idle chatter by standard, expensive telephone line: an egg timer would ring at the 15-minute mark to terminate the conversation at whatever point we’d reached. 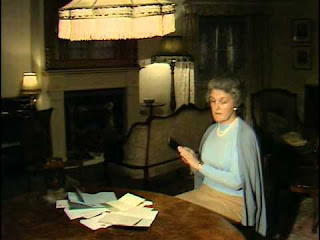 There always comes a point when I’m duty-bound to enquire about my mother’s health. As often as not, she will reply with something non-committal like, Oh well… you know, dear… soldiering on. Kate Winslet, apparently, has also been ‘soldiering on’ since her divorce. The phrase puts me in mind of the monologue of that title in the series of six that Alan Bennett wrote for television. I don’t remember much about it, other than that it starred Stephanie Cole as a woman whose fragile fortitude is both admirable and irritating. It’s a phrase that annoys me, above all, because it suggests such a deep-seated resignation to your fate that there’s little point in seeking to alter it.


You can also see it, I suppose, as symptomatic of the Dunkirk spirit: that stiff-upper-lip cartoon British stoicism lampooned by French and Saunders’ country women in Barbour jackets given to sawing their legs off without anaesthetic to stop scratches going gangrenous. There are, I discovered, annual soldiering on awards, which presumably celebrate such heroics. I find it hard to disassociate the expression from an image of regimented unquestioning men in khaki valiantly going over the top at the Somme.


I had thought that the French didn’t have an equivalent. Ca va is used so universally here that you can interpret it as you choose: it can be just as upbeat as it can be down. Anyway, it’s so disposable an expression that you don’t need to respond. It carries nothing like the same weight as ‘soldiering on’, which seems to suggest that things are actually really awful, but you’re doing your best to grin and bear it.


But Debs taught me one that she comes across a lot in her work. It’s an expression that I’ve heard now and again, but haven’t really given it much thought. Ca peut aller is much more loaded than ça va. Literally, it must mean something like, I suppose it could be all right (with the implication again that it isn’t). So whenever she hears a client tell her this, her response is, OK tell me what’s not going well.


When my mother mentions ‘soldiering on’, it acts like a red rag to a bull. I know I should let it lie, but It’s so difficult to do so. I want to probe, because I want her to see firstly that her notion of what’s awful is relative and probably pales into insignificance compared to the genuine burden of others, and secondly that, if things are as bad as all that, rather than meekly putting up with them, perhaps she should take some action to address them,.


However, I have given up probing over the last couple of years. Since she scattered her marbles across the living room floor and lost them somewhere in the pile of the carpet, she wouldn’t even remember the reason for soldiering on. If you were to question it, she’d answer something like, Oh well… you know, dear… it’s just the way it is. In other words, she has spent so long conditioning herself to believe that life is awful, she has forgotten why that might be so. So you just accept it and soldier on in the face of constant but intangible adversity. 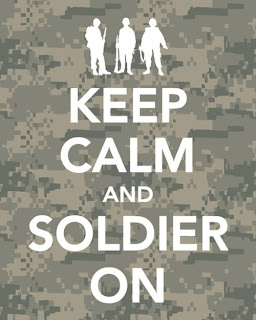 This week, me myself and I have been soldiering on. Despite my trusty support belt, I did my back in again lifting a manhole cover. I’ve been hobbling around like my octogenarian father. The dog doesn’t understand why I can’t play tug-of-rope. On top of that, I’ve caught a strain of the 100-day virus that my wife brought back on the train from England. So, every time I cough, I clutch my lower back as if trying to clamp the anticipated spasm in place.


Suddenly everything that you take for granted becomes an effort. It takes ten minutes just to put your socks on. You appreciate the truth of that other cliché, the one they serve up at New Year – when you wish everyone a year full of good things and good health. Surtout du bon santé. Good health, in particular. They’re right. While you’ve got it and you’ve still got a genetic memory of youthful vigour, you feel that you continue to do just about anything. But once you start feeling like a crock, you start behaving like one, too. It’s suddenly clear how easy it must be for people with health problems to get caught up in a debilitating downward spiral.


Thanks to the wonders of aromatherapy massage, I’m on the mend. Today is the first day in almost a week that I feel able to cast off my Lidl biker belt, my ‘man-girdle’. If anyone were to ask, though, I wouldn’t tell them that I’m soldiering on. Which got me thinking about whether there’s an expression one could use in times of distress that doesn’t smack so strongly of martyrdom.


I’ve come up with ‘advancing’. Suggestive, I think, of an army on the move, it even continues the military metaphor. The trouble is, you’d feel a right pillock using it.


Well, you know… I’m not quite sure where I’m going or how I’m going to get there, but I do still feel aware of a certain forward momentum – even if it’s only towards the grave, ha ha.

So maybe not. Nor soldiering on, or ça peut aller. Ca va is OK. But I’ll just continue to do what I normally do when I’m asked by solicitous parents on Sunday morning, which is to give a brief but balanced resumé of the situation and move on to a more interesting subject than the state of my health. It strikes me, anyway, that it’s often those in genuine dire straits who don’t like to talk about it. Recognising that it’s not enough just to soldier on, they are often the ones who go out and do something that inspires others.
Posted by Mark Sampson: Man of Straw at 12:28 PM