Shame about the inevitable rain on Saturday, great sheets of it, because it was an extraordinarily beautiful week. One of those cold, crisp and luminous weeks that make you appreciate the rare joys of winter. When it's as dry as that, it's not difficult to keep warm. The cold doesn't penetrate your bones.

I let the fire go out overnight on Monday for the first time in about a fortnight. I'd viewed the overnight log that I put on with suspicion. Sure enough, the next morning, there was no life in it whatsoever and the stove metal was cold to the touch. So I seized the opportunity to sweep the flue, from below and above. Up on the roof, working the hedgehog and rods down the still-shiny chrome steel of the chimney, with the landscape beneath me bathed in the first intense sunlight of the day, I felt a little like one of the old Viscounts of Turenne must have felt. Up in his now abandoned tower that dominates the northern horizon, surveying the same undulating basin that in days of yore constituted the old viscomté. 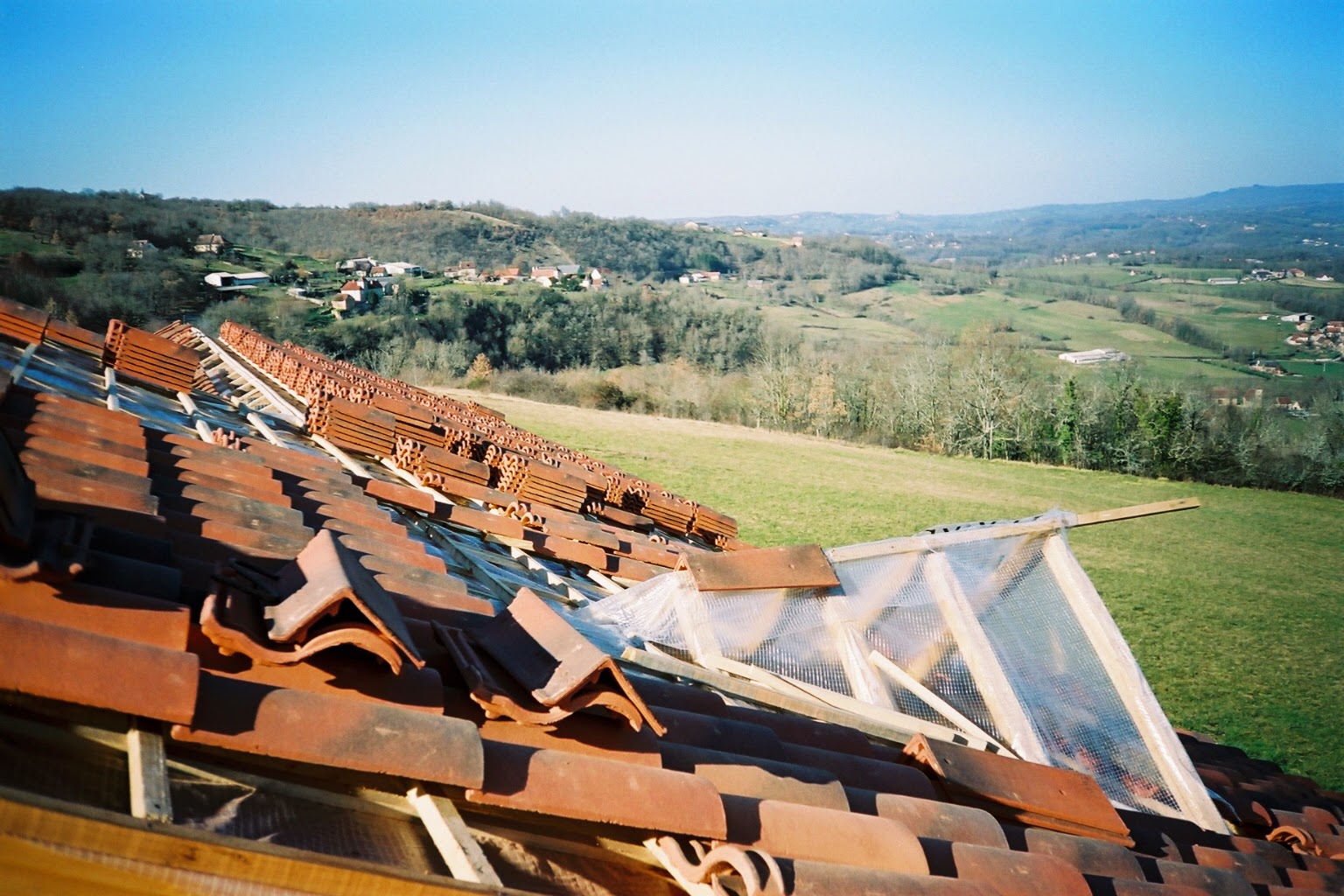 It was about this time of year, with the same glorious winter weather, that I spent several weeks sublimating my fear of heights, helping the couvreur put the roof on this house. A methodical man in a beret called Michel. A quiet, sober man with a distinct air of sadness. During our time on the roof together, I discovered that the sadness derived from child deprivation. He was a member of an organisation that called itself SOS Papa and he'd spent a chunk of the previous decade fighting his former wife for the right to see more of his children. Over lunch one day, he showed me some newspaper cuttings that described the legal battles that led his appearance at the European Court of Human Rights (or some such august body).

I hope he won his struggle for equal viewing rights, because I remember particularly the way his face lit up with love and pride when he brought his young son and daughter one day to the construction site to meet me and say hello and see where their dad was working. He was a changed man and I saw nothing on the faces of the children to suggest anything but affection for their mild-mannered father. 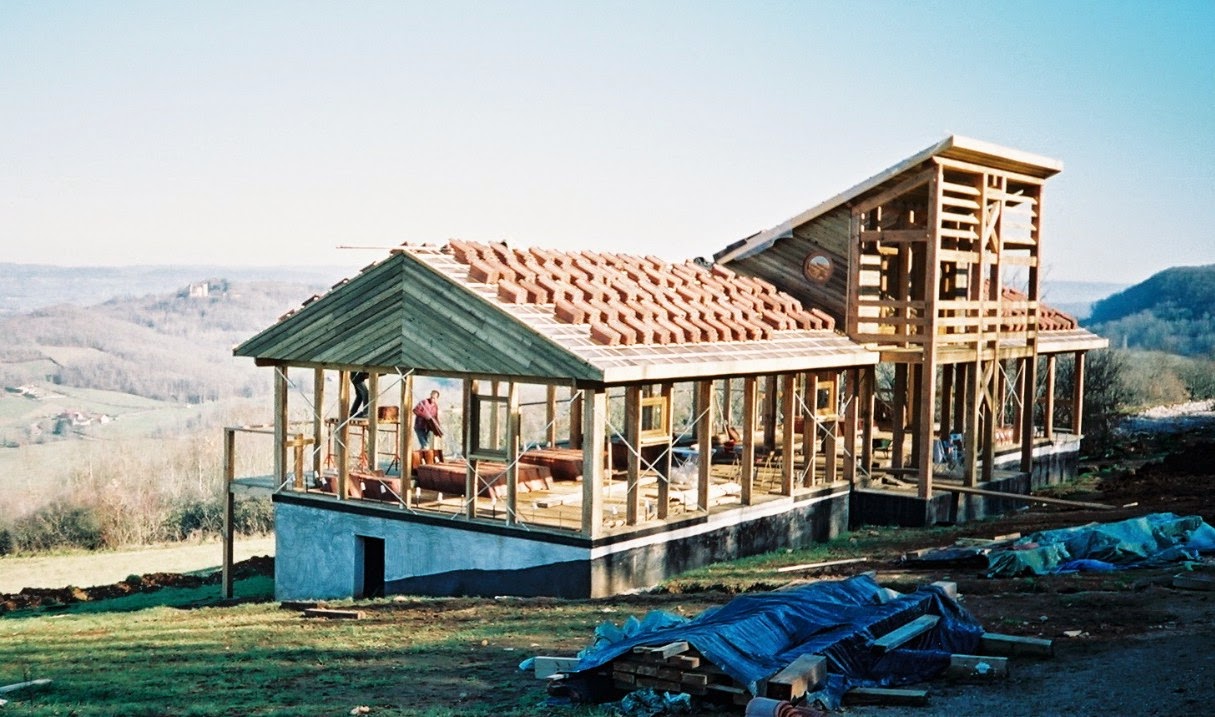 While the girls have been poring over pictures of deserving dogs that need a good home, I have been much preoccupied this last week with roofs. I saw quite a bit of my latest roofer of choice. He's a funny little taciturn man called Mario – though, ridiculously, we still call each other by the formal Monsieur. He's taciturn and a mumbler, which makes intelligible communications problematic. Nevertheless, over recent years, we've developed a kind of understanding and a mutually beneficial professional relationship. Mario does jobs for the co-proprietors at the chateau I look after, and in return he does me a price for any private roofing jobs I need doing. These days he even gives me his version of a sheepish smile when we shake hands.

Now that the Tenant of Wildfell Hall has quit the apartment above my wife's clinic, I've been able to engage Mario to fix a hole in the roof where the rain gets in. To stop my mind from wandering while he was outside addressing the fissures in the mortar, I went off into town to buy some posh tea for the girls at the Café Bogota. On my return, I caught sight of him on the roof at the back of the house, standing back to regard his handiwork. We waved sheepishly at each other.

It didn't make me queasy, because the roof above the tenant's sitting room is a flat one. At the chateau, however, Mario does a walk of death each time he goes out to inspect the latest problem with the wafer-thin guttering. It renders me almost physically sick. This week, the problem lay at the back of the building, so he walked all the way around the cornice of the chateau. I help him out via one of the Velux windows in the middle of the top three flats, then retreat to pace around the parquet floor, trying not to imagine a cry of distress followed by a sickening thud as a human body hits solid ground below.

This time, I found the courage from deep within to wander downstairs and out onto the back lawn to check that he had reached his destination without incident. He was already up there at the angle of the cornice and when he saw me looking anxiously up at him, he pretended to topple forward. His idea of a joke. It didn't amuse me.

I left him to it with instructions to lock up and hide the key. Back home, though, I had to calculate roughly how long it would take to do the necessary before I could safely phone him on the mobile. I have this disaster scenario whereby I phone him and, distracted momentarily by his ringtone, Mario loses concentration for a split second and topples forward for real.

So all was quiet at the Big House and I was able to go back to retrieve the key and check that everything was locked up securely. From a Velux in the adjoining flat I could see a shiny pristine length of zinc guttering laid in the part of the cornice where the old gutter had perished. Mario had lived to walk the walk of death another day and, thanks to his remarkable sang-froid, he had managed to fix two holes in two different roofs to stop the leaks before the rain came on Saturday.

I like to think that I choose my roofers, as we must choose our next dog, with care.
Posted by Mark Sampson: Man of Straw at 3:58 AM