Someone reliable who knows about these things told me the other day that if you turn up at an office of The Administration wearing shorts, you could be fined. So how much, I wonder, does the Republic levy on such impropriety, such temerity? €250? More? More than breast-feeding in public, for example?


I laughed. Which suggests that nothing surprises me now about this peculiar adopted country. Not like the early days, when such matters all seemed like a personal affront. I remember my first run-in with an attendant at a public swimming pool, somewhere in the Alps (for it was summer and the water was warmed by the sun), who informed me that I couldn't swim in swimming shorts. They had to be swimming trunks. But that was absurd! It didn't matter how much your protested; those were the rules.


I was told at the time that it was something to do with microbes. The collective fear of germs. I failed to see at the time – and still fail – how more germs could leach into the water via a pair of shorts. I suspect it was about potential impropriety. If the netting of the swimming shorts (or, to use a wonderful word that's under-employed outside of the garment industry, the gusset) failed to do its work and some poor child or woman were to look up a baggy leg and cop a peek of something they shouldn't have... Well, you can imagine the shame and scandal, the fear and consternation in the municipal pool.


Anyway, these days I pack a pair of both if I'm anywhere near a public pool. And I opted for longs on Wednesday, despite the dog-day heat, when I took The Daughter with me to the Pont de l'Ouysse. It was the final stage of my whistle-stop tour of the Michelin-starred establishments of the Haut Quercy.


My girl got well and truly dressed up for the occasion, even bringing out her folly chaussures: a pair of strappy platforms that reminded me of the shoes that my sister sent away for in the '70s, only to be ordered by our mother to send them back because she would break her ankle(s) should she topple off them. These days, apparently, they're known as flatforms. My brother used to keep the tips he earned from his days as a waiter in a single platform shoe that didn't match its supposed pair. He bought them cheap in some dodgy shoe shop in Bath and he never tried taking them back. 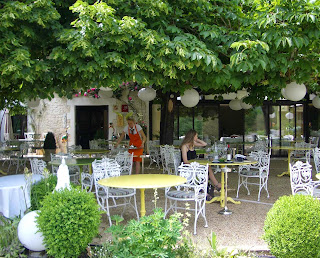 Enough of footwear. To the restaurant, Robin... We arrived at one on the dot to be greeted like visiting royalty. First, we were plied with aperitifs. Being a good boy, I opted for a non-alcoholic version. Since this was Tilley's first real experience of the lap of luxury, she went for something bubbly. Later, as the wine waiter kept topping up our glasses from a half bottle of some fabulous Cahors selected for us, she started to regret that reckless aperitif.


We sat underneath a huge old spreading chestnut tree, shaded from the sun, and a stone's throw from the river Ouysse. A beautiful tributary of the Dordogne, with an underground source near the famous Gouffre de Padirac, it skirts Rocamadour and empties into the big river a little further downstream from the restaurant. It's brief but dynamic enough to have carried off the old Pont de l'Ouysse itself, whose truncated ruins we overlooked. At one point, a party of cyclists arrived at the abrupt end to their path and thought better of attempting a daredevil Evil-Knievel-style leap across the hurrying river. 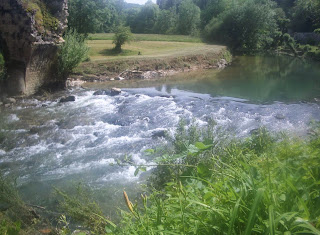 By the time they cycled past our shady terrace, we were well into the procession of exquisite concoctions. We counted four entrées before the plat principal arrived. One of them was a terrine of cèpes with garlic and parsley on a cream and mushroom velouté. During it, I died and found myself sitting by the plains of heaven. By the time that the main course did arrive, Tilley was begging for mercy. Her father, now a veteran of three gastronomic menus, was able to talk her through it and keep her going till the end: a cheese course that consisted of a Rocamadour goat's cheese melted on a bed of truffle-infused mascarpone; and an exquisite but probably ruinous dessert of a filigree meringue filled with all things nice and rich and fruity.


It was all a far cry from a meal I remembered as a kid, when my parents took me out to celebrate the passing of my 11+ exam (and an annual saving of around £200 in old money). I felt as proud as punch. Just me and my parents. Ya boo sucks to my three siblings, who had to stay at home with a baby sitter. We went to somewhere in the centre of Belfast, a city not renowned in those days for its cuisine. I can't remember what we ate, but I felt so grown up.


Hopefully, Tilley the Kid will remember her gastronomic outing with her free-loading father. The meal was indeed memorable, but it was also notable for the paucity of the vegetables. The few we had were more decorative than substantial. So we both came away longing for a nice fresh crisp salad. But please understand, I'm certainly not complaining.


After the meal, and after interviewing the obliging chef for my article, we went for a stroll in search of some donkeys and the confluence of the Ouysse with the Dordogne. We found neither, but didn't really try that hard since we felt compelled to go back and discover what mayhem Daphne had created in four hours at home alone. Be afraid; be very afraid...


In fact, we found her in her basket, with only a few gloves dotted around the floor. Good girl! What a good girl! My good wife, who was working while the pair of us were indulging ourselves at Lacave, continues to do excellent work with the Terrierdor. She has a way with dogs – as indeed she has with children. And adults in need, for that matter.


Wednesday represented the end of the fabled Saints de Glace. The three days in May are supposed to be unseasonably cold rather than scorching hot. After they've gone, you can bring out your house plants and geraniums and start planting your flowers and vegetables. So, later in the week, when the weather was more clement – not too hot and not too cold, with some refreshing overnight rain – we got to planting our lettuce and tomatoes. While I shooed the dog far hence for the intricate business of planting each tiny lettuce, Debs cleverly exploited Daphne's digging skills. She got her digging each hole for the tomatoes, then commanding her to stop and back away.

I could only watch in wonder and admire the way our leggy pup did as she was told. Like a truffle dog, in fact. No matter how fierce and authoritative I try to be sometimes, she never seems to take much notice of me. Neither does my wife. Nor our daughter. I wonder what it can be. Do my spindly legs look ridiculous, perhaps, in a pair of baggy shorts? Maybe they do, but shorts – like alfresco meals – are just one of the many pleasures of summer.
Posted by Mark Sampson: Man of Straw at 7:05 AM