It's that time of year again when the local farmers give their fields a crew-cut. From up here, the giant rounds of hay look like cotton reels dotted around the meadows below. Our man with the racy blue tractor has been and done his work on the Dog's Meadow here in two intense days of activity. His machine spewed out the big modern-day rectangular bales, which he stacked up overnight into a towering edifice of hay. The smell of shorn grass is fabulous and it means that I can launch old tennis balls for Daphne now into previously uncharted territory. 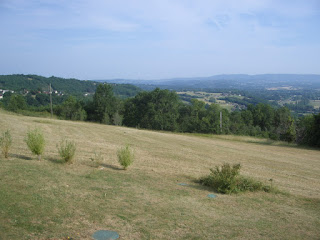 It's that time of year, too, when hornets the size of Lancaster bombers buzz around the vicinity with menace, and flying mange-touts sneak into the house to sit surreptitiously on the walls, waiting for the moment when you're least expecting it to exercise their wings and land on your desk when you're right in the middle of something. It's enough to give you heart failure. 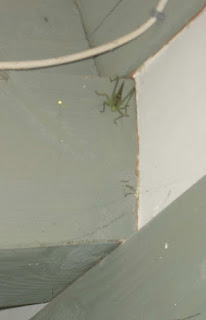 These giant crickets or whatever they are could just as well be locusts. Like the colony, in fact, that used to live in a glass tank in the corridor of the biology wing at my old school. They were a source of fascination for some, but I remember that they smelled peculiar and they were a reminder, even then, of biblical plagues and bad things for the environment.


With the intense heat this week, the mange-touts seem like harbingers of arid times to come. Already there's dark talk of drought. Poodle Man – who's back in town for the summer with his slow-moving wife, Poodle Woman, and their woolly black poodle, Cajot – stopped in his car on Saturday morning to meet Daphne, who was sitting good-girl style by the side of the road. He told me that the underground cistern in their garden is completely dry.


I hadn't realised that it had rained so little in recent months. The winter seemed reassuringly wet enough to replenish the aquifers, but apparently not. Gardeners and farmers rely on a wet spring, but apart from the humungous storm that swept much of our drive onto the grass, it would appear that the spring has been uncommonly dry.


It's not just Poodle Man sounding a note of gloom. The girls were out walking the dog the other evening and they bumped into Gil Scott Thomas – well that's my name for the younger of the two Thomas brothers, two integral parts of the clan that owns all the houses in a nearby domain: a kind of hamlet occupied entirely by members of the same extended family. He's a nice man, by far the better catch of the two brothers, who used to drive the school bus.


He talks with a funny piping voice, just half an octave down from Lou Donaldson, the alto saxophonist. Like his brother, he likes to talk – only his talk is much more interesting. Perhaps my wife used the excuse of having to get back to water the vegetables, but it prompted some extended reminiscences about his childhood in these parts. You didn't have to water in those days; you could always count on regular rain showers. Besides, they didn't have running water up here on the crest and they used to have to trudge down to the village and fill up from a well or a fountain. 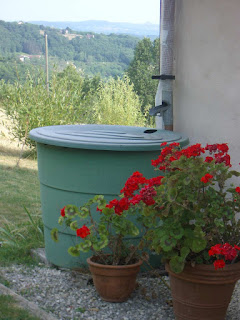 We water our paltry potager from our four green rain water butts, stationed at each down pipe at the four corners of our house. It's a labour, but not one of love. Not since in the early days in the Corrèze, where the soil is significantly richer than it is here, have we had vegetables in the kind of numbers that makes the toil worthwhile. It's true that there's nothing quite like a lettuce that has survived the local slugs and that you've cut from your very own plot, but there's a young guy at the Martel market who grows salades that are almost as good, so personally I'd rather pay him a euro for each one in recognition of all the hard work that goes into it. Still, we live in the country and we have a duty to grow our own. After all, Hitler would never have been defeated had we all rested on our spades and not dug collectively for victory.


Our rain butts, though, are already getting dangerously low. There's nothing spare for the roses, which are wilting now. Past their best for another season. The Good Wife's iPhone suggests that there might be rain on Wednesday. There were dark clouds yesterday evening and rumbles of distant thunder, but the phone suggested only 1% chance of precipitation – and it was dead right. So I watered begrudgingly before watching Barcelona beat Juventus in the European Cup Final. Wednesday had better not prove such a damp squib or there will be trouble. You mark my words.


We've spared a little rain water for the hound, who discovered an old blue plastic skip beside the log stores full of stagnant black water. We've converted it into a paddling pool for her and she spends ages in there, splashing about and keeping cool – and more to the point, entertaining herself. If she proves a very good girl – and she's currently in disgrace after pulling off our table a CD from the record library and chewing up the plastic sleeve – we might even keep it full with water from the mains in the event of the rains failing. For the moment, we can launch the tennis ball into the great beyond, she will run to fetch it, bring it back, drop it at our feet and plunge into her pool to cool down. 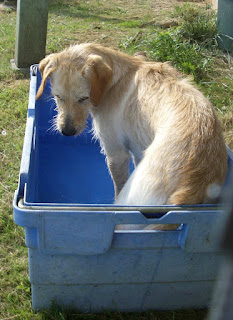 From somewhere up above behind my head, there came an extraordinary metallic rattling noise, which threw me off my stride. On getting up to investigate, I spotted a mange-tout tucked up in the shady angle of the beam. At least it signalled its presence. But it's remarkable that one little creature can produce such a strident noise. A plague of them and I guess you're talking the kind of sense-around sound in that scene from Terence Mallick's Days of Heaven, when wave after wave of locusts ravage the growing corn.

Hopefully, it won't come to that here. The farmers for now will keep on pumping water from the Dordogne to irrigate their mono-cultivated crops, while pool owners top up from the mains. After all, we're half a world away from California, where they've had something like 20 years of drought. It couldn't happen here. Could it?
Posted by Mark Sampson: Man of Straw at 3:18 AM