I spotted something on a French website about the link between muesli and death. Or something like that. I didn't check out the link, because it would lead me to more environmental gloom and life's too short anyway to investigate every headline. But there's a thought at the back of my mind now, as the Good Wife and I tuck into our morning muesli, that we could be killing ourselves softly with oats and raisins. 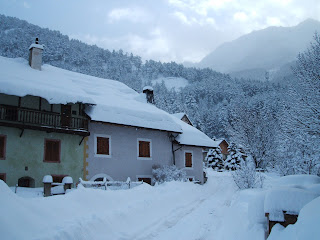 This last weekend, we should have been nibbling away at our life expectancy in the Alps. But, after the joys of an Indian summer, Lady Weather intervened. The forecast was peppered with orange alerts and we decided that the prospect of an eight-hour journey across the Massif Central and up and over the Col du Lautaret without snow tyres and with a restless Terrierdor in the back seat was too daunting.


The big col still holds terrors. It's 40 years now since my brother, his girlfriend and I spent the night in a cramped Renault saloon, parked in a village square and watching lightning flashing around the mountains that hemmed us in, because the daunting pass was closed for the night. A landslide or maintenance work on one of the open-sided tunnels that protect you from falling snow and rocks and avalanches.


We were on the way to see my dear friend from the halcyon days of Exeter University, who was working at the time as a chalet girl at the Montgenèvre ski resort. Jacqui and her French husband, Claude, now live in the shadow of the Col du Montgenèvre, in the spectacular valley of a fast-moving stream that feeds the fast-moving Durance that flows on its way south through the old fortress town of Briançon, reputedly the highest in France (that's altitude rather than the mental state of its 11,000 or so inhabitants). 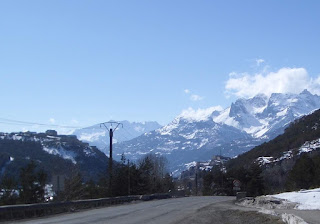 Some 20 or so years later, we did a similar trip, but this time with a tiny tot in the back seat of our hand-me-down car. Tilley the Kid had just started at école maternelle, if I haven't mistaken the chronology of our life in France, and like Monday's child she had just learnt to tie her bootlace. She sat in the back of the car for the entire epic journey, happily singing to herself as she tied and untied and then re-tied the laces of her tiny booties. No need for an expensive bone-shaped rawhide for our two-legged passenger.


At that time, we were desperate for contact with some kind of recognisable civilisation, having bedded down among the hill people of the Corrèze, who practised an alien culture based around mushrooms and accordion music and winter-evening concours de belotte. For desperate people, though, we plotted the most unimaginably long and tedious route to drive there: across the real Massif Central, not the picturesque version traversed these days by the A89. It was the bleak, windswept Massif of Etre et Avoir, that marvellous documentary film about the children and their teacher and the primeval farming community that clings onto a disappearing way of life.


Across the Massif and down the other side by one of the more tortuous roads built with tar macadam, over the Rhône at Valence and then east and upwards, ever upwards into the mighty Hautes Alpes. It was only after we drove through our friends' departmental prefecture of Gap, giddy by now with the excitement of being only an hour or so from our destination, that the child behind us started to whimper and fret as children her age are given to do.


It may have been the trip when we took only clothes suitable for a balmy June, only to wake up a day or so later and see that it was snowing outside the house that Claude and Jacq built. Summer snow is unwelcome, but it's easy enough to cope with given an extra layer or two. Winter snow is something else again. Therein lie the deepest terrors of the formidable col.


Some years later, we had emulated our friends and built our own house, among the more cosmopolitan people of the Lot. Barely an accordion in sight. By then, we had traced and re-traced a route from these parts to the mountain home of our friends that involved motorways just about all the way to Grenoble and only then the scary and relentless ascent with oxygen masks to the high country. We had even done it once by train, but it took so long that I nearly grew my first sideboards. Tulle to Clermont-Ferrand to Roanne to Lyon to Grenoble to Briançon. You lose count of the ch-ch-ch-changes. 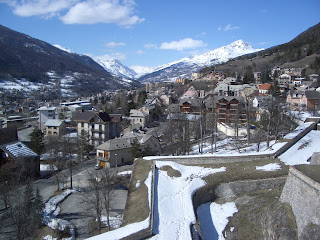 Winter snow, indeed. At one time, worn down by the rain that keeps the Corrèze so green, we even contemplated moving to be near to our friends. I was seduced by a big sign on the outskirts of Briançon boasting something like 300 days of sunshine each and every year. Just imagine. Yes, but just imagine having to adapt to five or six months of snow every year. My sensible wife disavowed me of such a notion.


So we keep on making the journey instead. One year, in deep mid winter, maybe the year we went to spend Christmas or New Year with them, we mistimed our approach. We were better equipped by now, with a set of chains in the boot of the Berlingo, but hadn't reckoned on the degree of difficulty of a tempest of snow in the middle of a pitch-black night. When we pulled over to put the chains on, I recalled the words of the busy garagiste who had sold them to me. Oui, ils sont faciles à mettre.


Easy to put on in a blizzard, chains are not. Particularly in the hands of cack-handed incompetents. While one of us shed the feeble light of a torch on the mystery of how to strap self-twisting interlocking chain-metal around a round rubber tyre, the other cursed and cried and generally acted like a petulant teenager asked to help weed the garden. Eventually, the Good Wife did what she does best: she exercised her charm. She asked someone behind us in the lay-by for help. It is ever thus in this family. The same thing happened in a campsite on the Atlantic coast, the first time we had to pack up one of those new-generation tents that simply spring up like dandelions.


It often works, but you have to live with the shame. After that trip, we had a number of practice sessions in our house that involved chains and a spare tyre. Although we both became quite proficient, we realised that there's a world of difference when you're trying to sheath a tyre that's attached to a car by an axle – particularly with lifeless fingers when it's cold and dark outside. These days, I believe, some kind of sockette has replaced the old metal chain. I'm not even sure that I could cope with a sockette on the pass.


Now I think about it, it was about this time of year that we made a foolhardy decision (all right, the original idea was mine) to drive across France and Italy to Vienna and thence to Budapest, to see a friend who was soon to pack up and head back for Sheffield. On the way home, we drove back across the north Italian plain through the night to avoid the lorries that had so blighted the outward journey. Having failed to find any kind of pensione that would afford us a few hours' sleep, we pressed on... and on and on. Past Milan, through Turin. With eyelids propped open and almost weeping with fatigue, we crossed the Franco-Italian frontier – just as the first snow of the season began to fall. We wound our way watchfully down the hairpin bends of the Col du Montgenèvre and reached our staging post just as Claude was getting up to make the coffee.


One good thing, however, about the layer of perma-snow with which they live for half a year is that the authorities are geared up for it. The snow ploughs are out in force everywhere. By the time it came to leaving for home, we followed one all the way down the Col du Lautaret to a sensible altitude.

So this year we missed out on our customary visit. But we had a rather delightful mini-break in the familiar confines of our own home. We were able to enjoy our deleterious breakfast. My friend Jacqui has lived so long in France now that she tends to indulge in a typical French breakfast: Claude's coffee accompanied by baguette with butter and jam. It's fine for a few days, but I find it stresses my delicate gut. I prefer to follow a coarser, wholemeal route to an early grave.
Posted by Mark Sampson: Man of Straw at 10:21 AM