December: A Dog's Christmas in Cumbria 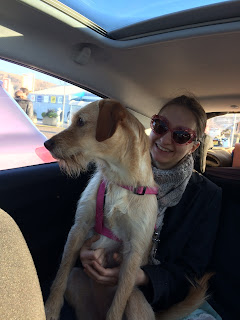 'A cold coming we had of it, /Just the worst time of the year /For a journey, and such a long journey...' Such a long, long journey. And like T.S. Eliot's Magi during their arduous journey, there were at times voices singing in my ears, saying that all this was folly.


All those kilometres at such a hard time of year for the sake of a mother-in-law and a dog. Christmas! it's over 800 kilometres to the Tunnel, then another 600 or so via England's teeming roads to the wild north-west frontier. It may be slightly shorter when you go via Paris rather than Rouen, but they drive like creatures possessed the nearer one gets to the capital and the traffic can grind to a standstill for no perceptible reason. There's nothing on the autoroute north of Rouen, so I stuck to my route-map.


Like those Magi, we came bearing gifts to mark the birth of a child in some far-off time in some far-off land – only we bore them by comfortable polluting car (with boot immaculately packed by my good self) rather than by 'sore-footed' camel. We had our own beast in the back: not of burden, but of leisure. Daphne sat strapped into the back seat, surveying the landscape and periodically grinding her teeth on a bone of rawhide. Not a curse nor a grumble did we hear from our indomitable dog of the meadow.


Normally, we would take the ferry at Dieppe or Le Havre (and I still find it hard to credit that we go au Havre according to the French language), thence to Newhaven or Portsmouth and on for an overnight stop with family near Southampton. We were, however, reluctant for our Terrierdor to experience the anxiety of sitting in an empty car among other empty cars on a crowded car-deck while the ship ploughed its way across the Channel.


And so we committed ourselves to the extra kilometres and the extra cost of an overnight stay on the way up and the way down. But what are time and money compared to the comfort and equanimity of a mutt? We would have paid for 'silken girls' to bring her sherbet had it been absolutely necessary, but the resistant rawhide treat proved just what the vet ordered.


It was our first Christmas abroad in 20 years or so and only the second time we have driven our car onto a transporter-train at Le Tunnel to be whisked in a trice under the sea and out the other end. But first there was the presentation of our passenger's passport at an office that hadn't even existed the first time, back when your animals were seized and locked up in quarantine for months at a stretch, without even time-off for good behaviour.


It went smoothly enough, but I was rendered anxious, 'galled' even, by a little barking dog that was tied up to the desk and apparently abandoned. It coloured my experience of the administrative process, as did Daphne's refusal to pee or poo to order in some dark corner of the car park. We even paraded her around a purpose-built paddock with artificial grass, prepared if necessary for the ordeal of pooper-scooping with a black plastic bag. But why of course would she stoop to such abnormal behaviour when it must have felt to her like she was padding on carpet?


Despite the dark and the rain at the other end, manfully I volunteered for the next leg of the journey. It was a matter of necessity – a matter, as Joseph Conrad might have put it, of immersing yourself in the 'destructive element' – because a refusal to get back on your bicycle after a spill is a recipe for phobia. The last time I'd driven in England, I'd been so traumatised by the sheer volume of traffic on the M6 that I now doubted my ability and courage to drive in the motherland.


I was wrong. Look mum, I can do it! After the first 20 miles or so of intense speeding traffic on the M20, the circulation returned to my bloodless knuckles. The M25 was easy-peasy all the way to the Dartford tunnel – for which I'd bought a one-way ticket thinking that the return across the bridge was free (in an era when nothing is free apart from the NHS and newspapers handed out at railway stations). At the Stanstead Services, where you could have reached out and touched the air traffic above, the Good Wife took over and took us to the Grantham Travel Lodge. There they like pets so much they charge you £20 for letting them sleep in your bedroom. 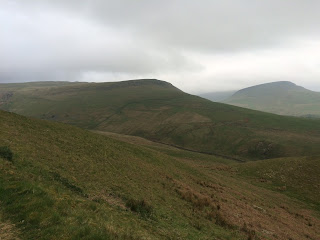 The following morning, I got up early to walk our doughty passenger around the darkened industrial park and the empty early-morning shopping centre that went by the name of Downtown. Cue Pet Clark, trigger pet's waterworks. There was even a bowel movement to report – on the hitherto unexplored grass behind our lodgings. What a good girl!


Later we mounted up, hollered our yee-hahs and took the car if not as far as Montana then all the way to Wetherby on the A1. Which offered further evidence that I could drive in England, even up a busy arterial road in daylight. The road that, before motorways, was once the most dangerous trunk road in the kingdom. Bathed in balmy wintry sunlight as far as the A66. as soon as we crossed the border into beautiful wild and windswept Cumbria, the rain came down like a Monsoon curtain. The North West welcomes careful amphibians.


Only 10 minutes from our destination, we ran into a very British traffic jam. The kind that goes absolutely nowhere for hours. It was, we surmised, either flooding on the road or an accident. So we followed some army boys from Pippin Fort and backed off the dual carriageway and down a slip-road in search of an alternative route to Appleby. Unfortunately, so did half the cars in Cumbria and the minor roads around those parts are barely wide enough for single-file tractors. There followed a nail-biting circuitous journey back to the A66 where, further on up the road, we discovered that the traffic was moving once more.


Thereafter, though, Christmas 2016 was characterised by a lack of incident. True, we couldn't find the little station, later that same day, when we went to pick up Tilley the Kid, who'd travelled north to join us by Megabus coach and via that most scenic of train journeys, from Leeds to Appleby-in-Westmoreland. So her eagerly anticipated mother-and-child reunion and (or maybe more pertinently, dog-and-child reunion) were tantalisingly delayed. True, too, that our pre-festive shop in Penrith was almost washed away by a deluge of Walt Disney dimensions. Otherwise, incident-free. 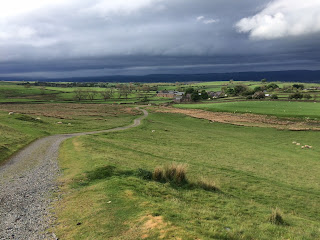 Because my mother-in-law now lives in a converted chapel no bigger than a shoebox, we rented for the week a cottage just a brisk windblown walk away across the Fells. Right next door to a working sheep-farm and hard up against the Fell-side, it was perfect for our needs. The Kid could comfortably sleep with Daphne in her room and there was a fully decorated tree in a sitting room that offered a view right across the Eden Valley (when weather permits visibility). It was a far cry from the 'villages dirty and charging high prices' that gave the Magi such a hard time of it.


There was even a hot-tub on the terrace outside the kitchen door – because apparently every cottage for hire should now have one if they want to compete for paying guests. Ah, there once was a time... Readers, we used it. Not once but thrice. And twice it triggered the strange sensation that comes from sitting in bubbling water waving at the gnome-like farmer next door as he roars past in his quad-bike. On the starry night after Boxing Day when we swapped a George Michael tribute for a quick nocturnal plunge, we discovered that night time is the right time for a hot tub.


Above all, our stone cottage afforded my wife the chance to re-discover her childhood roots. On with the waterproofs and off she would yomp across her beloved Pennines with our skittish dog, who needed no invitation to run off and inspect the odd cadaver of a sheep that had given up its relentless battle against the elements. Quite apart from giving her mother the kind of Christmas for which absence makes the heart grow fonder, this was I suspect the real reason we made the epic journey there and back. The Emily Brontë in her northern soul.


We wondered what Daphne made of this curious trip: into the car, out of the car; into one house, out of another. Through a tunnel darkly, not once but twice. All the way back, her view and our visibility were shrouded in thick stagnant fog. It was indeed 'the very dead of winter'. A hard home-coming we had of it, even on empty French roads. But there was Otis, waiting for us round midnight on the front porch. And there inside the house, his canine sparring partner found once more the familiar half-chewed wicker basket where she spends more than half of her life.


Oh! what joy it was to be home again and to climb once more into 'the world's most comfortable bed', as our PR company has labelled it. We slept the deep restorative sleep of Lethe. The river of forgetfulness. A hard going and returning in some respects, but we could rest now and be thankful. We had given an old woman the kind of Christmas that she has, reputedly, been yearning for. And we had given my hard-working wife the opportunity to walk the dog across her beloved untamed Fells.

Whether or not the dog felt that it was quite worth the disruption, however, remains to this day a mystery.
Posted by Mark Sampson: Man of Straw at 2:10 AM