May: Too Hot, Too Soon 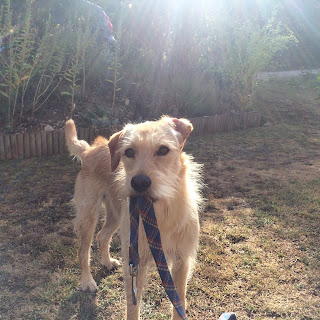 Early one summer morning in the merry month of May, I came upon a fellow dog-walker near the top of our drive. He panicked, because their Golden Retriever was off her lead. Oh let them play, I urged him. My French neighbours, perhaps the race in general, seem to want to keep their charges on leads when out walking, and yet will let them roam in the hamlets and villages. Is it a control-thing, or some vestige of the code of correctness? Like so many things in life, it seems to make no sense at all. It did at least offer us a brief opportunity for small talk. Yes, the weather was very nice, but it was too hot, too soon. August in May. I told him that I didn't 'support' the heat these days. Being of a slightly darker hue, perhaps Portuguese in origin, he likes the heat – but at its appointed time. Not so soon. Not before June.


Once the search for something to say became too excruciating, he put Pêche back on a lead, while I cycled off with Daphne trotting along by my side. I hadn't mentioned the elephant in the woods: global warming. Right about now, the presidential yob of the once United States is busy glad-handing the great and morally compromised of Europe, who are – one hopes – trying to persuade this denier of the obvious not to abandon the probably futile Paris Agreement. What does he care? He's rich, old and morally void. Why should he worry about Pacific Islanders, Bangladeshi, Inuit people and Polar Bears? His thoughts are focused firmly on the next round of golf. His descendants are already wealthy enough to buy a bolt-hole in New Zealand for the day when everything finally goes too pear-shaped to rectify.


Earlier in May, just before the mythical Ice Saints packed up for another year and took their annual cold snap with them, I wandered up the same track with the same dog. It was just after the relief of hearing that the French electorate had voted for a young, thrusting independent as their new president rather than an extremely bitter, vitriolic extremist. The acceptable face of Fascism had been rendered unacceptable by some injudicious remarks on television and a clever campaign on superimposing a Trump-face on her image. I stopped to open our green metal letterbox. It was full for once and there were three intriguingly similar letters within. One for each of us. Aha! I twigged. To be honest, I'd rather given up hope, and put it all to the back of my mind. I was quite convinced that François Hollande had instructed his Minister of the Interior – or whoever decided these matters – to block any Brits applying for dual nationality. That'll larn them for their Brexit betrayal. I had resigned myself to recommencing the whole costly, time-consuming application process once the new regime was in power. I wasn't even sure that I would bother a second time.


The letter was actually dated towards the end of April. Perhaps, if someone had pulled his or her finger out of the in-tray, we might even have been able to vote in the recent elections. But as I read on, I realised that things of course could not possibly move so swiftly. It would be another six months before we received our official gubbins: an identity card, one of those livrets familials in which are detailed the facts of your life and those of your parents and, I've read somewhere, a new birth certificate. Surely not. Anyway, there will be some official ceremony in our departmental seat of Cahors. It may feature the singing of the Marseillaise, so we'll have six months to brush up on the lyrics.


I walked off with a new-found spring in my step. Strange, I thought it might all be rather anti-climactic given the time elapsed since that hot August day of the collective interrogation down in Toulouse. Maybe I'd even be a little blasé. It's only paper, after all. Well no, it's not. On one hand it gives us a legal basis for staying on in a foreign land, on the other it's a kind of official recognition that we have served our time and merited our recompense. Now, whenever I get that inevitable enquiry as soon as I open my mouth to speak French – Anglais? – I can reply, Oui mais Franco-Anglais. Or even, to really confound them, Mais non, Français! Whereupon, I can whip out my big 10" identity card.


Actually, I felt a great surge of pride. I wanted – and still want – to tell everyone I encounter. To shout it from the highest hill. Typically, though, there was no one abroad, so I dropped in on our Dutch neighbours who are building their family home further along the crest. They were sitting round the back of their embryonic home, enjoying the warmth of the late afternoon sun. I accepted their best wishes but refused the offer of a beer, because the sky was ominously grey and I didn't want to subject myself or our post to the kind of soaking that had recently deepened the gullies in our track. 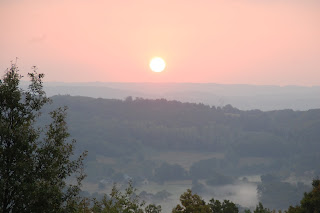 Had I been a couple of decades younger, I could have made an announcement on Facebook, but I don't necessarily want the trolls out there to know our business. But the Good Wife and I got the chance to crow a little at yoga later that week and then again that weekend when we were invited to eat with friends in a beautiful part of the Lot/Corrèze frontier that I'd never seen before. Have you heard the one about the Englishman, the Englishwoman, the Dutch woman, the Portuguese woman and the two Frenchmen? One of the Frenchmen used to teach Portuguese. Well anyway, it was one of those lovely international affairs when the cultural blend makes for a rich, relaxed social entente. After a protracted meal, we took the various dogs out for a two-hour walk that kept providing stunning vistas – south and west over the térritoire de Brive and east as far as the mountains of the Cantal. It made me think back to the yoga class, when one of the women there implied that Brexit had prompted our application for dual nationality. I don't think on my feet very well and I should have answered simply, No, it's because I'm proud and privileged to live in one of the most beautiful places on earth (despite some of the maddening individuals who live here).

Now the heat of summer is upon us. Politically, things will be heating up if young Mr. Makron is to fulfil some of his stated objectives. Shaking hands with Trumpus Le Rumpus has already kicked up a little media firestorm. Pruning the civil service will no doubt prompt the next round of divisive strikes. Initially, though, there are the legislative elections – for which we will still be ineligible. There's plenty, though, for a downhill gardener to be getting on with in preparation for the dog days of summer. Strimming, mowing, fighting off the army ants, swatting flies and mites, ushering inquisitive and intimidating hornets out of the house, shutter management, tomato and lettuce watering et cetera. Oh, and learning my lines. Allons enfants de la patr-i-e! It's a fine, rousing anthem, but the scansion alone is hard enough for a foreigner. Still, there are six, no make that five, months ahead of us.
Posted by Mark Sampson: Man of Straw at 7:46 AM