At the Saturday morning market, I bumped into the local antiquarian. As camp as a bottle of chicory essence, he speaks with a tiny voice that you have to struggle to hear. Normally he comments about the amount of time that has passed since we first shook hands way back before the Great Recession and chides me because I still haven't dropped into his shop to look at his wares. This time, he muttered something about another summer, another influx of tourists, another crowded market. 'It's so boring,' he suggested: a nice new variation on the so Breetish refrain. I replied that I found it somewhat reassuring to know that certain things don't change.


But I get what he means. The stifling heat of summer only makes me listless and aimless. I stare at a blank electronic page on the computer screen, scan our book shelves, regard the bedraggled garden choked with weeds and just come to the conclusion that I can't be bothered. It's so boring. The relentless, repetitive march of time can be so dispiriting. 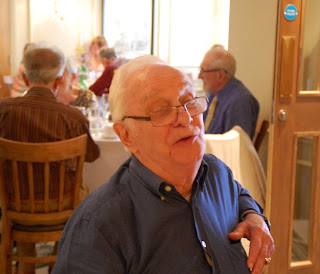 Conversely, that familiarity can be a reassuring anchor when things around you are changing at a seemingly breakneck speed. And it's never so apparent as when you're a parent. The Kid is with us now for what my instinctive wife reckons will probably be her last summer at home with the Aging Ps. We met up in Romsey, Hants. for my father's 90th birthday celebrations: one of those periodic excuses for a family conclave. Despite the occasional simmering tension, everything went off as (long) planned with no outbreak of hostilities. I even had to put the old fellow to bed after the Friday night meal for the first time in my life. It's a strange business, removing your parent's socks. I was transported back to the days (of never reputedly having it so good) when he would help me undress and tuck me up in my bed. Now I'm the adult and he's reverted to the egocentric child. Will the circle be unbroken?


The three of us travelled back to deepest, hottest France, taking this time some of the old byways that we hadn't driven down for years, not since the completion of the various motorways that now speed us home. I had a rendezvous near Selles-sur-Cher, to visit a producer of the area's celebrated goats' cheese. The indignity of being the last car off the ferry, the post-Brexit queue for passport checks, the aberrant bottleneck outside Dreux and the deviation for a meeting that failed to transpire all added up to at least three hours on the journey time and a reminder of just how epic the long haul south used to be in the old pioneering days.


No sooner settled in her old familiar bedroom, than our grown-up girl was driving to the local airport to pick up two friends from college. It wasn't quite the boyfriend moment, more an underlining of sorts that our girl now has very much a life of her own. Significantly, too, it was the first time since she left school that she's ever brought anyone home with her. From what I can gather, she hasn't even kept in touch with any of her colleagues from a miserable two years in Paris. So it was rather nice to hear the three of them sitting outside at night on the back balcony, chatting and laughing together. Rather reassuring, too, to know that she felt comfortable enough to bring back friends to meet the parents. During my student days, the idea would have been preposterous. There was no one I would have wanted to subject to the primitive discomforts of our dysfunctional domestic life.


For a week, the house resounded with the happy noise of three female housemates. I like girls, but they don't come cheap. When you factor in all the extra food and the hot water required for daily beautification, it emphasises the sheer cost of bringing up a big(-ish) family. I would have had to go out and get myself a real job. No way could we have lavished so much on our daughter's education, not with two others to subsidise. Little wonder, now that I come to think about it, that my mother attempted to divert me from higher education. She even arranged for me to talk to a colleague at the gas board. Fortunately, he was someone who hadn't read her script. He recognised me as a brow-beaten teenager and counselled me not even to consider passing up such an opportunity.


A full house carries certain compensations. Like delegating dog-walking duties to three girls only too happy to oblige. And sneaking off to bed for a read unnoticed at an earlier hour than usual. Perhaps also symptomatic of my aimless response to heat, I can't seem to settle on any particular title at present. The narrow space between wall and edge of bed is currently a litter of books, magazines and old newspapers. I'm dividing most of my precious reading time mainly between two quite incompatible tomes: a fascinating biography of Edith Sitwell and Bass Culture, a seriously entertaining history of Jamaican music. Much as I'm interested in the literary and artistic figures loosely associated with the Bloomsbury set, I'm beginning to realise that about the only thing I can get truly excited about these days is music. 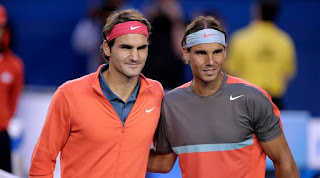 Well, actually... there's always Wimbledon. This year like every year we gather for the highlights programme – now fronted by the awful Clare Balding, whose high-heel shoes and Crimplenesque jacket do her no favours at all – or catch part of some titanic struggle in real time. The fifth set between Nadal and the previously anonymous Luxembourgeois, Gilles Müller this July was one of the most gripping conclusions to a match that I've ever seen. It occurred to me how often over this era such gladiatorial combats have featured the charming Majorcan. No one I've ever seen in my years as an armchair tennis player has displayed such an insatiable will to win. People talk of the rivalry between Borg and McEnroe, but it dims in comparison to that of Federer and Nadal, the sporting equivalents of Hector and Achilles. We may never see their likes again...


Our two auxiliary girls went home just before Wimbledon and without giving me any real clues about the kind of music that they and their contemporaries were currently listening to. Being polite, well-brought-up young gels, they made us a nice meal on their last evening, which we washed down with a posh wine that they could probably ill afford. It was a pleasure; you can come again any time.


Now that they're gone, I've got no excuse for not knuckling down to the task at hand. The trouble is, there are so many that I know not where to focus my energies. I'd just sat down to make a start the other day, when the phone rang. I answer any unidentifiable callers now with the utmost caution. An 06 number means a mobile phone and probably less chance of being some concerted scam or hassle. It was our local family doctor. A problem of translation. Would I s'il vous plaît come over to the surgery to listen to a message he'd received from an English patient?


Poor man. Such is his dedication to his job that he will spend an hour or more with a client. Frequently, he works well past his surgery hours and often misses a meal in the name of duty. This is a man who listens so keenly to what you have to tell him that you can see the cogs whirring behind his eyeballs. I compare and contrast to our family doctor in Brighton. A nodding man who would start scribbling on a prescription pad as soon you'd opened your mouth. Good for the occasional sick note, but nothing more.


I listened to our doctor's messagerie on his mobile phone, straining to catch the words that were distorted by a poor connection. It was impossible to discern the name of the medication about which the client was concerned. I heard just enough to tell our doctor that he was American. The English have a bad enough reputation  here without Americans and Australians being lumped into the equation. Our doctor apologised for his schoolboy English and suggested that he should find the time to study the language. But he has no time and why on earth should he? For one thing, English is not yet an official Esperanto. For another, I fervently believe, if someone chooses to live in a foreign country, then it behoves them to learn the language. And if they can't, then they have to accept the consequences.


How thoughtless and selfish to put such a conscientious man into such an invidious situation. Knowing him as I do, I can imagine how awful he'd feel if something serious were to happen to his patient as a result of a lack of mutual comprehension. What was the man thinking of? Or, more probably, not thinking of? 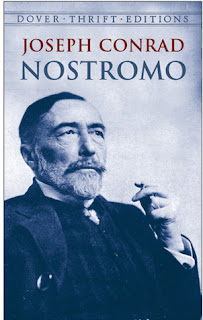 Our doctor told me that he can read English better than he can either speak or understand it orally. He asked me if I could recommend any novels that might help him with his education. I suggested that perhaps the purest English I'd ever read was to be savoured in F. Scott Fitzgerald's The Great Gatsby. Or something by either Vladimir Nabokov, a Russian, or Joseph Conrad, a Pole. Lovers of literature through the ages will be thankful that neither of them deemed it unnecessary to learn the language of their adopted countries.
Posted by Mark Sampson: Man of Straw at 3:39 AM