I've never been a great one for conspiracy theories. Apart, that is, from the Kennedy Brothers, and probably Martin Luther King. Oh and maybe Anne Boleyn's fall from grace. And Caesar's infamous removal, of course. And Catesby & Co. Rasputin's murder? Hitler's attempted assassination, too. Perhaps the partition of India and no doubt of Iraq, Palestine and Ireland. Oh, and there's Brexit now. And Russia's role in Trumpton. 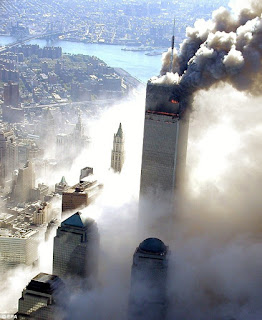 Put like that, there have been quite a lot of conspiracies that prompt a theory. Up until now, though, I hadn't given much credence to the various 9/11 theories that have been bandied about in the cyber world for over a decade. But then I had two meetings this month with strange men that continue to make me think.

The first was with a stranger on a plane. I'd turned up at Limoges airport in ridiculously good time lest some unforeseen jam on the A20 delay me. (Apart from the two months of high summer, it's more of a vehicular vein rather than an artery). While queuing up to check in, I watched with barely disguised contempt as some aging Brit flirted with the uniformed wench behind the desk. His was the aye-aye darlin' nudge-nudge school of charm. Rather like the publican in East Enders played by a minor comedian who used to bellow Rick-ie! at his stepson or whatever relation he was. I made a mental note to avoid him like the plague.

I managed to do so until we were on board the airplane. There was an air of inevitability about the unoccupied seat beside him near the back. He was busy dispensing bonhomie to the hostess when I realised with a sinking heart that my allocated place was indeed right next to him. No sooner had I parked my backside, strapped up and opened my book than he started talking to me. Sometimes I resist. Sometimes I realise it's futile. This was one of the latter occasions.

His name was Stan or Len or something monosyllabic. His accent seemed to spell Essex and I soon discovered that he'd lived in France for long enough to learn the language well enough to get by. The accent, I guessed, would leave something to be desired, but hey – who am I to cast nasturtiums? He'd been in publishing and had sold up just before it became the thing of a pre-digital past. One of those astute self-taught businessmen of the Alan Sugar genus, perhaps, who have an instinct for the main chance.

I gave up any attempt to read my book. Voluntarily. The conversation became increasingly fascinating, instructive even, and I realised that if I could swallow my prejudices, there was a lot to learn. Swallow I did. The conversation turned from our partners to our offspring to the big scheme of things and our general sense of well being. I don't know how we got from there to 9/11, but we managed it seamlessly. And he told me all about his... if not obsession, then pet theory: that the collapse of the twin towers defied all laws of physics. I'd read something similar many years ago and kind of shelved it as the work of people without better things to do with their lives.

But the way Stan or Len described it to me made all those horribly vivid images come alive once more – but as if seen this time from a different angle. Through a prism darkly. What about the motivation, though? The details he offered boiled down once again to filthy lucre. Isn't it incredible what people will do just to have so much more of the stuff than can make you happy? But surely no one would sacrifice all those office workers who either stayed to be incinerated or leapt from floors so high that one has to hope that they passed out before impact with the concrete below. Surely? He shrugged as if to suggest, Make your own mind up on that one, Sunny Jim.

One thing about this type of conversation is that it makes the journey go much quicker than usual. In no time, we were in the Disunited Kingdom once more. I thanked him for the entertainment and a potentially useful bit of avuncular advice he gave me, bade him a happy stay and focused on getting now from B to C.

And after that I thought little more of what he'd suggested, until a visit from an off-grid guy around these parts I refer to as a 'maverick American'. He must spend many hours holed up wherever he is hidden, delving into the darkest corners of the world via his laptop. He let slip something about his pet theory. On falling for the bait, it turned out to be the self-same theory that Stan or Len had described up in the clouds. So much of a pet theory, in fact, that his e-mail signature contains a cartoon of high financiers and politicians gathered around a detonator linked by fuse to the twin towers. Primed to plunge the handle. 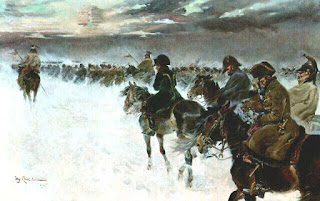 He, too, outlined some of the details that defied even the most basic laws of physics. I was never one for science at school, but I could see that what he said made sense. But surely, I suggested, no one would be so evil as to sacrifice hundreds of his fellow countrymen. Oh no? he replied. Take a look at history, my friend. He has a point. Never mind the usual premier-division suspects. What about Napoleon and that long march into Russia? And Robert Mugabe for that matter? While we're at, let's not be vague, let's blame Field Marshall Sir Douglas Haig. Although in his case, personal gain probably didn't come into it. More the crass stupidity born of innate privilege.

Oscar Wilde, in his usual memorable way, had some pertinent bon mots to say on the subject of my disbelief. So memorable that I've forgotten the precise details, but something about our propensity to believe the impossible, but to deny the improbable. Thanks to Oscar and the revelations of strangers, I'm now delving more into the improbable – and do I not like what I find!? 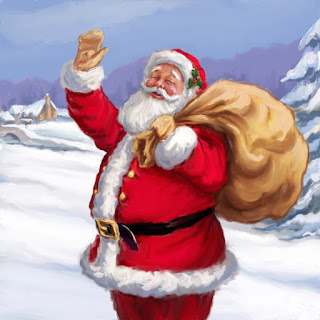 But hey! Christmas is almost upon us once more. It's that merry and joyful time of year when you can drink enough and eat enough and watch enough telly to anaesthetise your cerebellum. What a lovely word that is – to describe something essentially grey and spongy that resembles a giant sodden walnut. I'm going to give my walnut a rest for a few days and focus my thoughts on Father Christmas' customary struggle to wriggle down all those chimneys with a sack of presents. He never seems to get his red suit or his white beard sooty. Have you noticed that?


Maybe it's a conspiracy.
Posted by Mark Sampson: Man of Straw at 1:34 AM