March '18: A Visit from the 7th Day Witness Brethren


Early this month, I had my annual visit from a pair of J-Wits. (I want to write to the head honcho to suggest this new hip-hoppish re-branding for the snap, crackle and pop of the 21st century, but can I get a witness? Can I heck as like.) At school, we studied comparative religion in Divinity, as it was called then, and I vaguely remember thinking that Zoroastrianism was obscure but reasonably credible. But even though I worked with a young J-Wit during my brief tenure at American Express, I couldn't tell you what they're all about or why. Can I get inside the head of a witness? Hell, no. 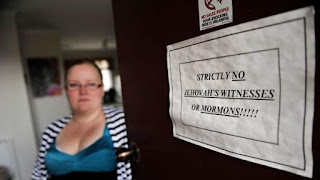 They stood there on the front porch, trying to ignore our barking, dancing dog. As usual, they addressed me in English – while I replied in French. Naively, I believed it was a mark of respect or at least an attempt to curry favour. This year, however, they handed me a flyer for some meeting in Brive later this month. Written in English. So it dawned on me, gullible fool that I am, that this English-language stuff is part of a concerted attempt to prey on a vulnerable section of society. The Expatriates: they came from elsewhere to settle in a strange country – where they lived alone without friends, without the safety-net of a family. Perhaps not an Oscar contender.

Maybe they work in the same way that the Moonies and such like, who will pick on the kind of young girl travelling alone in a foreign country that I once lived with in a shared student-house in Brighton. Poor Jane. I'm not sure whether her parents ever did manage to prise their daughter from the sinister grip of Sun Myung Moon's US mob. I hope so; she was a nice girl.

So I guess the J-Wits send their emissaries out – anyone, that is, with a vague knowledge of how the English language works – to cold-call on all the British and Dutch expatriates within a certain radius of Brive la Gaillarde. And there must be quite a few. My diligent, dutiful witnesses were a middle-aged black woman with a hat and a handbag and a painfully young smiling boy in a dark suit. He can't have been a day over 17.

I was tempted to tell Madame avec le sac à main that if she sang like Mahalia Jackson in a choir at a Baptist church presided over by someone like the Reverend Al Green, I'd be there as soon as the doors opened, but I didn't wish to submit her to any racial stereotyping. No sir, I was politeness itself. I took their leaflet, told them that I was very sorry but I simply wasn't religious, bid them adieu, and stepped back into the warmth and comfort of my own house. Daphne and I watched them walk back up the track to their parked car, where they lingered for a surprisingly long term – perhaps updating a laptop with something like 'Re-essayer l'année prochaine' or 'Try again next year' (depending on how serious they are about their English-language campaign) – before driving off to the next address on their list.

It might have been instructive perhaps to invite them in for a cup of herbal tea and a chat about their shibboleths, but life's too short and I know better now than to let anyone get a toe inside the front door. Once, as a student at Exeter University, I let a pair of Mormons over the threshold and it was the devil's own job to get rid of them. Eventually, I worked out that the unblinking stare discombobulated them and threw them off their patter. But even so, it took a good 40 minutes. 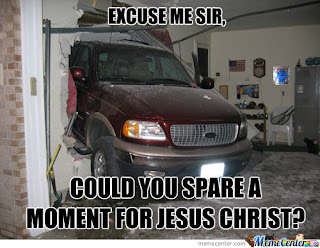 I never like to be impolite, but it doesn't do to be too considerate. Give them an inch and they'll take a cubit. Nevertheless... I would be intrigued to know a little more about what makes them tick. I understand why they effectively cut themselves off from the modern world in the way, say, that the Hasidic Jews do, and I gather that they believe that the cross was but a single vertical stake (although I wouldn't have thought the distinction was worth losing any sleep over), but their attitude to death is perplexing. On one hand, they don't seem to countenance the kind of post-mortal paradise that awaits a suicide bomber. When a person dies, they argue, their existence ends, completely – which sounds remarkably level-headed until you delve into the idea of The End (forever and ever, Amen), because apparently there will be room for 144,000 souls only in Heaven, from where they will rule (what's left of?) Earth with Jesus Christ. Many of the also-rans will be granted everlasting life on earth – which could be deemed 'paradise', depending on your view of the world.

It's all very odd and probably best that I don't go too deeply into it with a member of the clan. After all, there was that unidentified jiffy bag with some religious tract within that arrived mysteriously a couple of years ago. Never been so disappointed in all my life. Probably the work of a visiting J-Wit who detected a flicker of weakness in my otherwise steely stare.

Anyway, I only ponder because an old friend of mine is now in a hospice after a long and gruelling struggle with cancer and I can't seem to get death out of my mind. Or should it have a capital 'D'? He's feeling very unhappy and scared and I keep thinking of all those poignant monochrome images etched in my mind ever since I was a child, permitted by possibly misguided parents to stay up late and watch an epic series on The Great War. As Andrew Marr suggested in one of his excellent programmes on the making of modern British, it's rather typical of our dark British sense of humour that we should promptly apply the adjective 'great' to the worst war of all times.

While dipping into a bedside book the other night, As I Was Going Down Sackville Street by a literary surgeon, Oliver St John Gogarty, a contemporary of James Joyce and W.B. Yeats – described as 'a lilting autobiographical account of irish life in the 1920s' (but not alas in the same hilarious vein of Flann O'Brien's pieces for the Irish Times) – I came across this resonant passage about Death: 'Once we relax the fear of Death something happens to Life. It would appear, then, that Death is an astringent to Life. It is verily. This is borne out by the fact that those who are near to Death fear it not so much as those who are in the fullness of health and the enjoyment of life. These are conscious of what they have to lose, and so the contemplation of the opposite condition becomes frightful. Death holds life together. We are borne onwards by the black and white horses.'

I note that Gogarty capitalises Death. His is an interesting thesis for sure, but one that my suffering friend may wish to take issue with. I won't know until the time comes, but meanwhile I'd welcome an annual visit from someone of Mr. G's kidney. Rather than  leave him standing on the front doorstep, I'd invite him in for a cup of herbal tea or coffee (but not his favourite Guinness, as I can't stand the stuff) and a frank discussion about the mysteries of life. Without fear of indoctrination.

I fear though it will be another abortive visit from the J-Wits this time next year. They're nothing if not thick-skinned and obdurate. I wonder how many vulnerable expatriate souls the woman with the handbag and her youthful sidekick managed to lure to the meeting in Brive. I wonder whether it'll be the same pair next year. Perhaps the young lad will suddenly find that he's grown up to be an independent thinker. I wonder...
Posted by Mark Sampson: Man of Straw at 6:53 AM