May: A Lesson in French History

This month, oy bin learnin' all aboot French histree, see. Actually, it was the end of April, but since I seem to have spent the whole of May either mowing the lawn or re-writing gibberish for a client, please pardon my poetic license. I had a good dose of French history in 6th Form, specialising in the Revolution and then studying on up to the Dreyfus affair and the horrors of Verdun. But as for anything prior to the cake-eating and the Terror and the assassination of Marat in his bath, I knew of nothing more than Versailles and the massacre of the Huguenots. And as for post-Armageddon and Armistice, all those short-lived republics passed me by as I buried my head instead in the films, see, of Carné, Clouzot and Chabrol, and the novels of Camus. 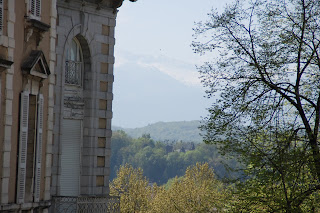 In the words of soul songstress, Jean Carn, 'I got some catchin' up to do...' And I caught up in Pau. Way down south in the Béarn, overlooked by the mighty snow-capped peaks of the Pyrenees. A long coming we had of it, the Good Wife and I (riding shotgun with her camera for my magazine assignment). Four hours or so of dreary, expensive motorway.

The Tourist Office lodged us for the Saturday night in a Best Western hotel, which didn't sound that exciting – and we had a hell of a job finding its subterranean garage, even with the aid of path-finding technology – but it turned swan-like into the old Continental: a magnificent belle époque hotel right slap bang in the middle of town. Our room was modernised, of course, but the lobby and corridors retained an air of what it must have been like in times more gracious than today. What with the whispering automated lift announcer, I could have danced the continental right down the length of the corridor to our fourth-floor bedroom. 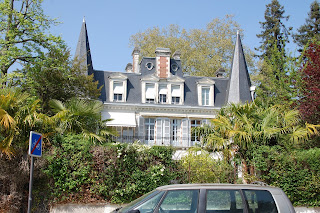 Around that era, Pau was an important spa town. Word got out that the air was good for respiratory problems, and a wave of well-heeled Brits came here in the late 19th century to build the kind of so-Breeteesh mansions that the cheery driver of the little tourist train pointed out during the half-hour excursion. (A strange business, to ride in a train that doesn't run on rails.) Not that British, though, Debs and I concluded. More like British ex-pats' attempts to build in the vernacular. Not unlike today's reproductions in cement blocks of local Lotois houses with pigeon towers and gob-ons, they betray a lack of authenticity. If anything, they reminded us of scaled-down versions of palaces built by the mega rich of the Industrial Revolution in Newport, Rhode Island.

Pau is now in the process of trying to reinvent itself as a centre for water sports and hi-tech boutique start-ups, and like those great houses facing the distant mountains, the city seemed on Day 1 – in the immortal words of Billy Liar – 'neither mickling nor muckling'.

But then, on the Sunday morning, it all fell into place. The previous evening we'd walked down to the river and across the bridge to eat some of the best genuine Vietnamese food I for one have ever tasted, in a small but very busy little restaurant presided over by an overworked but remarkably good-tempered factotum. He seemed a little bemused when I showed him a copy of France Magazine that I'd been carrying around with me for just such an eventuality. Given the size of the establishment, I didn't have the gall to try and blag a free meal, so I simply suggested that I'd publish the details of his restaurant in the article. End of story. But not quite. He brought us a pot of Vietnamese tea after the meal. On the house. And when we were settling up at the counter, behind which two women continued to cook flat out in their woks, he presented us with a packet of said tea.

On the way back, warmed by our host's touching gesture, the spectral faces of historical dignitaries projected onto the vast wall of the Château de Pau reminded us that this place was really important long before its late 19th century renaissance. It was the capital of the joint kingdom of Béarn and Navarre, whose most famous son would become the city's resident spirit: the man on the equestrian statue... good king Henri Quatre.

Next morning, it was fresher and more overcast than the previous scorcher. We waited in the courtyard of the chateau, surrounded by architectural opulence. A door opened and a woman stepped out. I thought of Dr. Prunesquallor's purblind sister, Irma, emerging from her Gormenghast apartment. Pure fantasy. The charming woman did not have rooms in the chateau. She was just a guide – but what a guide she turned out to be. She offered us our own personal tour, so she could practise an impeccable English she'd picked up from time spent in Milton Keynes. Of all places.

She took us into the old kitchens and there beganneth the lesson – in front of a model of the chateau and the old town that nestled around it. I'm a sucker for models; it must be something to do with my unquenched hankering as a boy for not just a train set (which I had), but a pâpier maché landscape through which to run it. I could have lingered long by the maquette, but there were extraordinary tapestries to see and a dining room with a table on a series of trestles long enough to run an Olympic sprint on its lacquered top, ante-rooms and royal bedrooms and voids between the original stone walls and the later wooden panelling that servants would use to effect magical appearances with goblets of claret and steaming dishes of roast swan. 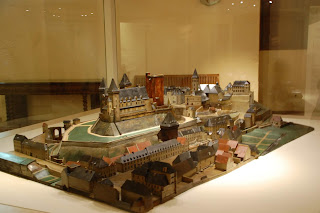 We even saw what I understood to be the legendary (giant) tortoise shell that served as the infant Henri's cradle. He was born a Catholic but raised a Protestant by his mother, which probably explained the pragmatism that characterised his reign. In order to assume the throne of France, he gave up his Huguenot faith (which almost got him massacred on St. Bartholomew's Day) to revert to Catholicism – but then threw in the Edict of Nantes as a sop to however many Huguenots survived the slaughter. The trouble was, for all his popularity (which seemed to stem from a genuine concern for his people – as typified by his wish that every peasant should have a chicken in his or her pot come Sunday lunchtime), he couldn't please all of the people all of the time and, after surviving previous assassination attempts, he was finally stabbed by the dagger of a fanatical Catholic named Ravaillac.

We saw his helmet with the white plumes – or panache (which gave me an aha! moment) – that was depicted in paintings as well as all those equestrian statues. In one such painting, yer man – le vert gallant or Green Gallant – with the panache is seen on horseback underneath the balcony of one of his many mistresses. Our guide told us of another popular legend, that Henri Quatre had 'a bone for his sex', as she so sweetly put it. In other words, he couldn't keep his pistol in his 16th century equivalent of a pocket. 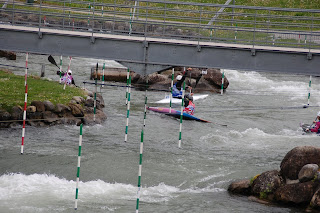 The legend lived on in the popular imagination. He sits today astride his horse on the Pont Neuf in Paris (having been pushed off it during the Revolution), and when the Bourbons were restored after the fall of the house of Bonaparte, Louis-Philippe and co. created something of a cult around the first of their kind. Part of which, if I got my facts right, were the home improvements at Pau, which turned a rather monotone medieval chateau into the fascinating bastardised chateau-of-many-styles that it has become.

And so endeth the lesson. Let us now praise famous men. We returned whence we came after a quick visit to the new centre of water sports, where the sportier aquatic Palois were paddling for all their worth around a series of hurdles suspended from rails that bridged the water, while the more bourgeois and leisured Palois surveyed them from the centre's chi-chi restaurant. Yes, Pau is reinventing itself. Kayaking schmayaking, personally. Being a history man at heart (and a poor swimmer), I'm more attracted to its past.
Posted by Mark Sampson: Man of Straw at 4:42 AM