The social whirlwind that blew up at the end of last month has abated at last. I've never known anything like it. You expect rather more activity than normal during the two or three months of high summer – like camels, we stock up on cultural water before the long parched trek across the rest of the year – but the last fortnight or so has been as dizzy as a dervish in full whirl. Even the occasional trip with our amphibious dog to the nearby river – at its lowest level since my records began – has failed to restore mind, body and spirit. 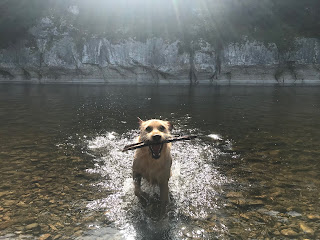 Once the abominable climatically-changed temperature had died down a bit and the Youth of Today below us had given up their attempt to smash the record for the most all-night parties in a calendar month (following a broadside from my woman on the verge of a nervous breakdown), things started to happen. Her fury spent and suitably refreshed by a good night's sleep, Debs met-and-gret an Argentinean rugby player and his parents who stayed in our flat above the clinic, while I slipped off to the Rex to see Inna De Yard with the last admission on our season ticket. Joy, joy and thrice joy. The documentary about a group of ageing Rastas who gathered Buena Vista stylee to launch an album and a concert tour was entrancing. If Cedric Myton of the Congos, a kind of septuagenarian kid with dreadlocks the colour and apparent texture of ash, was the most endearing, Ken Boothe – dressed immaculately in a succession of lurid tunics by his doting wife – was the most singular. Glimpses of the Boothes' domestic interior design suggested that never has so much colour been so clashed by so few.

On the way back to the clinic, the young woman from the agency that manages our studio flat phoned to say that the new tenant had a leaky flush – which, apart from filling me with dread, recalled a moment in primary school when 'wee Erskie' announced to his P4 classmates, Miss, Sharon's burst a pipe! She (the agent and not the unfortunate, incontinent Sharon) offered me the choice of doing it myself or calling the agency's tame plumber. It was one of many Liberty Valance moments in my life. As Jimmy Stewart discovered in the movie, there comes a time when every man has to whip off the apron and face up to the bully with a six-shooter. Surely it shouldn't be too difficult to mend a chasse d'eau. My Dutch friend, Wim, confirmed that even a man of my limited practical abilities should be able to do-it-himself. I should have remembered that it took John Wayne to gun down Lee Marvin's Liberty.

My unfortunate decision opened up a can of insanitary worms that wriggled and squirmed around my grey matter over the course of the next fortnight. While a lesser source of worry in the great scheme of things than incipient war in the Persian Gulf, Trump and Bolsinaro's assault on the environment and the imminence of a no-deal Brexit, nevertheless the saga of the leaky flush de-stabilised my fragile equilibrium. It's incredible, this capacity of human beans to substitute peccadilloes for the Really Big Worries. 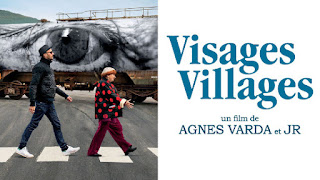 But first I had to drive to Toulouse and back to pick-up the homecoming 'prodge', as a friend used to dub our daughter. She was here to share with us the opening blasts of the social whirlwind: dinner on our blasted lawn with friends from Martel, followed the next evening by Agnès Varda's final film in a field down in our commune. Outdoor cinema is catching on in these parts and it's nice. As with all things communal, however, it does entail the awkward business of mixing with fellow communards, whom you don't know from Adam, Eve or Nip-me-tight. Fortunately, I spotted our equally reclusive neighbours and we were able to sit relatively incognito. Visages Villages is a charming account of Mme Varda's travels around France with JR, a photographer in shades and permanent 5 o'clock shadow, who blows up snaps of locals and pastes them on village walls.

Soon after this came a trip to the plus beau village of Curemonte for a picnic with friends followed by a concert in the grounds of the medieval chateau. We sat under a crescent moon listening to a troupe of three women sing show tunes accompanied by a young male pianist. 'Charming' is the kindest way to describe it, but it passed an hour pleasantly and gave us food for debate as we walked back to the car. Whose voice was best? My daughter and I both agreed that the soprano sounded rather too quasi-operatic, the darker-hued woman veered slightly off tune on occasion, and the alto in the backless satin creation probably sang most consistently well – even if her pronunciation of the English lyrics was the most bothersome.

Meanwhile, things were going from bad to worse in the first test at Edgbaston and in the tiny bathroom of the tiny studio flat. The agent (or my fallible French) had led me to believe that the place was empty. It wasn't. If there's anything worse than facing up to your own incompetence, it's having it witnessed by A.N. Other. The horror, the horror! The new flush mechanism cost me €8, but you couldn't put a price on the shame of failing to fit it. Wim had failed to warn me that if you screw the cistern to its base too tightly, you run the risk of cracking the porcelain. You know the old saying: A cracked cistern leaks like a motherfff... For God's sake, gardez l'eau!

I took my angst with me to Nick's 63rd birthday dinner later that same day. Our chum Giles, who looks less like Mick Jagger now that he's sporting a salt-and-pepper beard, was very understanding. He's camping with his family nearby while holidaymakers are paying for the considerable privilege of staying in their watermill. He told me that flush mechanisms are not that easy to fathom. 'Just go and get a new toilet; you can pick one up for sixty euros or somefink,' he suggested, still sounding like Mick Jagger. I didn't let it spoil a beautiful starlit dinner under the convivial, spreading oak tree.

During a temporary social lull following the departure of our girl, I took advantage of the The Tenant of Wildfell Studio's fortuitous absence to buy a new loo and watch Wim fit it. Much the better option. Oh to be capable and confident. An operation that took about two hours would have taken me two days, involved chronic dyspepsia, and I would have probably cracked one of the tiles on which the shiny new throne now sits. Back home, the Good Wife and I celebrated my liberation by watching a couple of episodes of a new series about Bob Fosse and Gwen Verdon, his long-suffering wife. Sam Rockwell is very good as the philandering choreographer, while Michelle Williams is riveting as the legendary Broadway dancer. 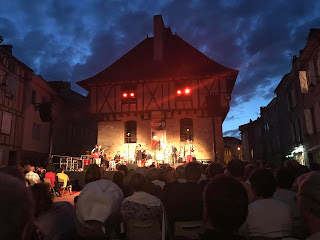 And so to the eye of the social storm. We voyaged first up-river to the small market town of Saint-Céré for my rendezvous with Yapunto!, a Franco-Colombian group who were playing that evening in the venerable Place du Mercadial. Obsessively punctual, we got there at six on the dot, only to discover that the band were still rehearsing. Blow me down if they didn't finish till gone seven, but musicians aren't known for their punctuality. I grabbed ten minutes of the singer's time for my promised article before she went off to eat. But in that ten minutes, I was smitten by Alejandra Charry. Are all Colombians so open, friendly and downright enchanting? My wife certainly thought so. On taking our leave, I watched the two beaming women hug like long-lost sisters.

After another, brief picnic with friends, we hurried back for the concert itself. French audiences never cease to amaze me. A cursory glance at the three or four hundred sedate beings in serried ranks of plastic chairs didn't inspire me with confidence, yet people were up dancing from the first number until the second encore. Debs blistered her big toes, I wearied my calves and the collective enthusiasm was wondrous to imbibe. Such a polite, repressed nation; but such liberated souls in concert.

There was barely enough time to ask pancakes for breakfast? before we were off again: north by north east this time after a biblical downpour for our Amerikanische Freund's 60th-birthday luncheon. The following evening we did it all over again with the same people and a few more besides chez Thomas, where Debs and I were introduced to a game of winning simplicity called Smite. I'm a more competent sportsman than handyman: After winning two games on the trot, I stepped aside to help instead with retrieving the wooden missile thrown at the blocks of wood, which stand like miniature Easter Island statues, waiting their turn to be smitten. Olympic status is unlikely, but it could replace croquet and ping-pong here on home turf. Something to occupy the occupants in less frenetic times. Après le whirlwind, le Smite.
Posted by Mark Sampson: Man of Straw at 6:53 AM