I’ll start this week by asking you a question that has been sweeping through the French nation: What’s your favourite Joni Mitchell album?
Triggered last week at the dinner table by an idle conversation between the senior Sampsons and four visiting friends from Sheffield, the controversy was heightened this week by the arrival of a CD in a cardboard package from those nice people at Amazon.
It seemed to be the unanimous opinion of the Four Friends from Sheffield that Blue represented Joni’s finest hour. I professed, to universal horror, that I wasn’t overly familiar with Blue since my personal love affair with Ms. Mitchell started after hearing the gorgeous Court and Spark. Controversially, the Missus and I voiced the common line that Hejira was our favourite album. 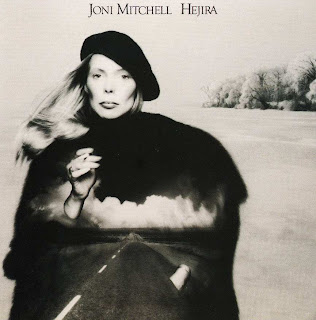 So, on returning to Sheffield, the kind friends sent us a re-mastered copy of Blue. I knew ‘Cary’ of course and one or two others and while the songs are all fairly memorable, I was struck by how shrill Joni’s voice sounded to my ears. Blue seems to be the zenith of the gawky long-haired long-dressed Joni’s art. This was Joni Mitchell, the girl-woman folkie, with whom Graham Nash and David Crosby fell in love.
Being a bit of a jazzer at heart, I love the more explorative, experimental Joni Mitchell of the brooding Hissing of Summer Lawns, the ambitious Mingus, the self-assured Night Ride Home and, particularly, the evocative Hejira. I had a listen to the delicious ‘Song for Sharon’ just to be sure. By then, her voice had dropped half an octave, she was using jazz musicians of the calibre of bass player, Jaco Pastorius, and her lyrics were either more enigmatic or more obtuse, depending on your standpoint. So I’m quite sure. Hejira gets my vote. But the French nation will vote the week after next and the result will be announced on a TV special by a diminutive president in stacked-heel shoes. I’ll keep you abreast of the situation.
Meanwhile, nostalgia has been the name of the musical game this week. I’m not quite as bad as my father, who refuses now to listen to anything but British dance band music from the 1930s and ‘40s. Nevertheless, I’m showing worrying signs of living in the past (to quote a song by Jethro Tull, which I once owned, only to sell it when 7” singles were deemed unhip).
I watched, for example, an excellent documentary on Steve Winwood. It was strange to hear his speaking voice, accustomed as I am to the mid Atlantic inflections of one of the great soul singing voices, white or black, of the last 40 years. He speaks with a middle-class Brummie accent, pronouncing his gs, as in ‘singgingg’. And it was a little alarming to see that he has turned into a landed squire of the Cotswolds.
But then Steve Winwood never really courted controversy. Perhaps the most outré thing he ever did was to cut his hair in a bizarre wedge and don a sporty jacket for the MTV videos of his 1980s adult-oriented-rock persona. No, as brother Muff testified, bass player with the excellent Spencer Davis group that first presented his prodigious younger brother to the world, Steve Winwood has always just been quietly and uncommonly obsessed with music.
As a kid, I loved Spencer Davis and I loved every incarnation of Traffic and, as an ageing nostalgic, I love the music he has created since he got over the haircut and the jacket – especially the music he has made of late with Eric Clapton. Moreover, it was Steve who made me feel better about not being able to play a note on any instrument. I read an interview with him in which he described the curse of being a musician: that he can never listen to music without analysing it and thinking about how he might approach it.
A fine fellow, the Cotswold squire. Having just finished Peter Doggett’s excellent book on the post-break-up Beatles, I’m not sure that the same could be said of the Fab Four. I think I’ve mentioned how my sister, my brother and I as kids used to divide up our meals among the four mop-tops. John would always get my prime cuts. These days I wouldn’t be too averse to sharing with George, Ringo and, for all his control-freakishness, Paul. But John wouldn’t even get the crumbs from the table.
As for Yoko, I wouldn’t even offer her the dog’s dish after he’d licked it clean.
Posted by Mark Sampson: Man of Straw at 12:07 PM