It hardly seems appropriate to be writing about cultural matters in the light of World War 3 in North Africa and Apocalypse Now in Japan – particularly the kind of whimsical stuff that has been on offer last week. Nevertheless, one has to pretend that life goes on as normal…
There was nothing normal about Paul King’s extraordinary directorial debut, Bunny and the Bull, aired on Film Four – that wondrous channel for movie buffs who refuse to pay Rupert Murdoch for his satellite services. Paul King created the surreal TV comedy series, The Mighty Boosh, which I somehow contrived to keep missing, even though a friend avowed that I would love it, seeing how I was such a fan of Flight of the Conchords, HBO’s comedy series of two whimsical musicians from New Zealand adrift in New York. 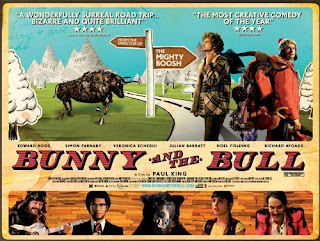 It’s difficult to summarise it succinctly, since there’s nothing (chrono)logical about it all, but roughly speaking it’s based on the recollections of a vegetarian agoraphobic, who has incarcerated himself in his flat following the traumatic conclusion of a European holiday with his disreputable, unreliable, hedonistic friend, Bunny. What made the film so remarkable was not so much the characters, but more the wacky backdrops to the episodic plot. There is one glorious scene, for example, where the hero and his would-be Spanish girlfriend (who bears a tantalising resemblance to Penelope Cruz) ride a Ferris Wheel made from the parts of old clocks.
Visually, the film seems to have been conceived in the spirit of Oliver Postgate, whose wonderful whimsical creations lit up my childhood: Noggin the Nog, The Clangers and Bagpuss, for example – all of which displayed a similar kind of lunatic home-made inventiveness. I never met Mr. Postgate, but according to some retired German friends in the Corrèze, he had a holiday home not far from our old house. I would like to have shaken his hand, and would willingly do the same to Paul King, should he ever decide to settle near here.
We also watched Scottish director David McKenzie’s Hallam Foe, which was a little less zany, but rather more edgy. The element of whimsy kept threatening to teeter into something sinister and unpleasant. But it didn’t, thanks partly to a lovely performance by Jamie Bell of Billy Elliot fame, who played the eponymous hero with a brooding charm. One of the stars of the film was the city of Edinburgh, which is still one of my favourite cities in the world despite the unfortunate consequences of eating a rogue sausage in a B&B on the edge of the New Town. Another reason for identifying with the vegetarian hero of Bunny & the Bull.
Still following my whimsical thread, I’m reading a delicious novel by an American writer: Cathleen Shine’s The Three Weissmanns of Westport. It reminds me a little of The Accidental Tourist and other books by Anne Tyler. The same kind of gentle comic sadness that seems to get to the essentially mundane business of life on earth (for those of us who are luck enough to have the time to meditate on the subject). It’s supposedly a homage to Jane Austen’s Sense and Sensibility, but I’m too immersed to step back and see it clearly just yet.
And finally… a friend introduced me last week to the Reverend Billy and his surely hopeless crusade to stop Americans from shopping so much. His album, The Shopocalypse, contains some excellent gospel music from the Stop Shopping Gospel Choir and some splendid rants from the Reverend himself, which are uncomfortably like those of some genuine southern TV evangelist.
May your week be full of the ‘beatitudes of buylessness’ despite the awful events of this criminally insane world of ours.
Posted by Mark Sampson: Man of Straw at 10:54 AM