The Ouysse is a short but spectacular river that flows into the Dordogne at Lacave. For most of its 45 or so kilometres, it travels underground – part of the labyrinth of caves that have transformed the limestone causse into a geologist’s theme park. After its emergence somewhere near Rocamadour, the last leg of its brief journey forms a magical steep-sided valley dotted with some of the finest watermills in the region. Being a family home, the Moulin de Latreille may not be the best known, but it sure hosts the best parties.

I went there on Saturday night with a pair of graphic artists: my friend Dan and his father-in-law, who told me tales of the wildlife near his home on the east coast of Scotland, somewhere between Aberdeen and Inverness. We went for a kind of private performance by Gigspanner, Peter Knight’s spin-off three-piece band when he’s not busy touring (as one of the group’s founding members) with Steeleye Span. 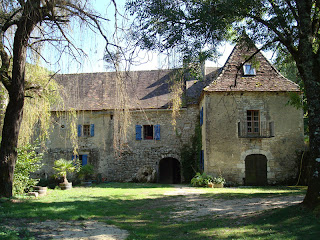 Peter and his wife, Deborah, stayed at Fi and Giles’s chambre d’hôte a couple of years ago when they were looking for a house to buy and no doubt fell in love with the mill, as most people do. I imagine that they probably stayed in the bedroom whose window looks out on the Ouysse as it skirts the house. Subsequently, the guests tracked down that elusive house in the unpopulated wilds of the Creuse. They had talked with mein hosts about one day playing at the mill and Deborah arranged the gig as part of Gigspanner’s short tour de France.

We have known Fi and Giles for ten years or so. Due to the trying business of having to earn our respective daily bread, we don’t see a lot of each other, but it’s one of those bonds that matures and strengthens as the years go passing by. Every time we come away from the mill after a party or a dinner date, we drive home with a warm glow that derives from a feeling that we have been privy to something memorable. The pair of them know such a diverse range of people that they’ve become legends in their own lunchtimes. Giles, for example and much to my envy, numbers Procol Harum’s Gary Brooker among his coterie. One Sunday we met a friend of theirs from England, who – we discovered – used to share a house near Guildford with my brother.

Getting to the mill involves a vertiginous descent down a track ravaged by rainwater. Each time, it creates a sense of child-like expectancy in me, as if I’m following Jules Verne’s Arne Sacknussemm down into the centre of the earth. You can measure progress with the mill by the state of the track. Fi and Giles have suffered for their ‘art’. For years, they banged their heads against the doors of indifferent officials in seeking help with the road and with a turbine that would harness the energy of the mill-race. They’ve endured winters that would have tested the mettle of Shackleton’s Antarctic team. Parties in the early years were powered by throbbing turbines that devoured fuel like it was on special offer at the Boxing Day Furniture World sale. But things have come together over the last few years. Although subject to the vagaries of the river, the water turbine helps to keep them warm in winter and the chambres d’hôte are now included in the Alastair Sawday guide.

We paid the price of admission and parked in a meadow bordered by the river and the steep cliffs of the opposite bank. If you’re steeped in the mythology of the Wild West, you can almost imagine that you’ve stumbled on the hideout of the Hole In the Wall Gang. It wouldn’t surprise you to see a group of horsemen kicking up dust as they zig-zag down through the brush of the precipitous rock face. Instead, we stumbled upon kids playing games and adults standing around chatting or sitting on some of the old armchairs dotted about incongruously. After the brief overnight rain and an unpromising morning, the sun had come out in the afternoon and the air was still balmy, filled with the smell of sausages and chicken wings smoking on barbeques. 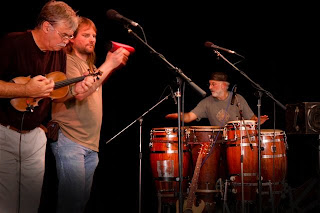 The three band members had set up their stage in the cavernous barn whose low beams create a deceptive sense of intimacy. Lured by the sound of Peter Knight on the fiddle, those of us there for the music stood or sat in semi-silent devotion while those there for the ‘craik’ carried on carousing outside. One particularly loud group of hooray-Henrys combined the two. If I’d been Peter Knight, I would have given them a very cold and meaningful stare until they got the message and drifted off outside. But Peter is a good-humoured man who clearly has that enviable ability to lose himself utterly in the act of creation. Watching him communicating wordlessly but joyously with his two campadres as he stringed or plucked his fiddle, I thought about how it must be almost a religious calling to be a musician.

Only the previous weekend, I’d watched a clip of Steeleye Span performing their well-worn ‘All Around My Hat’ on some BBC archive collection that went with a documentary on Fairport Convention. The 2012 version of Peter Knight was reassuring like the 1960s model: glasses, moustache, a little greyer, a little heavier. Probably, too, a little funnier. His laconic introductions seemed suffused with the experience of 45 years in the business.

I was never a great one for the folk revival as a lad. I saw Ralph McTell and Al Stewart once, and the unique John Martyn on a few occasions at Queens University, Belfast. I had a single or two by the Fairports, Basket of Light by Pentangle and a brilliant album by the oft-forgotten Trees. But on the whole, fiddles and fingers in the ear weren’t my cup of tea. On Saturday night, however, I was spellbound by the brilliance of the musicianship. Just three men and their instruments: Peter on fiddle, Roger Flack on guitar and Vincent Salzfaas on the most tasteful djembe and congas. It was folk music, Jim, but not as I knew it.

They played two sets separated by the inevitable extended interval. They rewarded the woman who brought them a clutch of beer cans with two extra numbers after the obligatory encore. And then we shuffled off into the night, some to stay in tents pitched on the meadow, others to drive home. I asked Fi if they’d made anything out of the event. Not really, but it was good publicity. More importantly, it was the occasion. And who knows, maybe next time? Lit up by coloured fairy lights strung from the trees, the mill sometimes appears as a kind of gift to their friends.

The stars were out in force as we trudged to the car in the darkness. We spoke of the magic of the occasion. It was one of those special events that mark out your life. Ah yes, I remember. What a night. Late September 2012. I saw Gigspanner at the Moulin de Latreille. Down by the river Ouysse.

Posted by Mark Sampson: Man of Straw at 8:08 AM